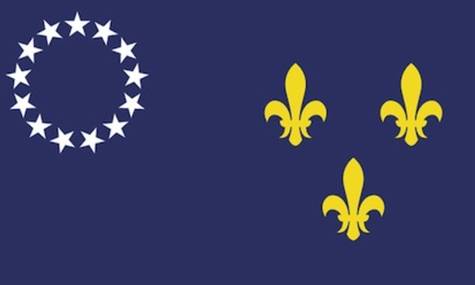 Since 2003 when the City of Louisville and Jefferson County governments merged, we Louisvillians have suffered the humiliation of having a terrible flag represent our great city. It's terrible. It's the most boring, forgettable flag I’ve ever seen.

As if this wasn't bad enough, Louisville previously had a FANTASTIC FLAG which the 2003 merger flag replaced! Aside from being infinitely more aesthetically pleasing, the old flag represents the history of Louisville in an elegant way. The fleur-de-lis to honor King Louis XVI whom the city was named for. Also, the 13 stars to represent the 13 states which existed when Louisville was founded as a river town on the frontier of Virginia in 1778. Simple, stark, and powerful. In 2004, a poll conducted by the North American Vexillological Association even named the old Louisville city flag as the 9th best looking city flag in the entire United States!

In recent years, the old flag has made its way on to t-shirts and bumper stickers all over the city. The branding potential of the old Louisville flag design is tremendous, and only just now being realized. Some Louisvillians even have tattoos of the old flag design. I’ve yet to meet a single person with the post-merger flag tattoo!

We request that the post-merger flag be abandoned in favor of the old Louisville flag effective immediately. The flag is a symbol which represents the identity of the people of Louisville, Kentucky. A symbol we can all be proud of.