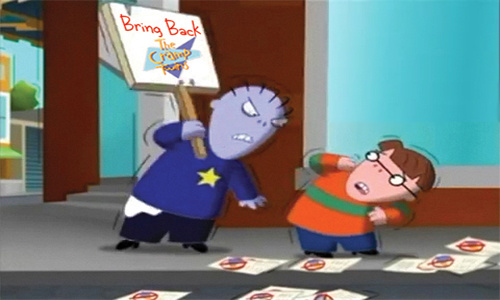 Bring Back The Cramp Twins

The Cramp Twins was a cartoon based on a series of graphic novels by Brian Wood. Made at TV Loonland and Cartoon Network Europe; this show follows the lives of Wayne and Lucien Cramp, two twins with absolutely nothing in common. Wayne is the naughty troublemaker who is crazy about scrap metal and sugary treats. Lucien is a smart, peace-loving vegetarian with a fascination with nature. The two of them would often get at each other's throats while living in Soap City. There were other memorable characters like the cleanliness-obsessed mother, the cowboy dad, the rich brat Wendy Winkle, the midget Tony and many more.

It was funny, clever, it had a unique and colourful art style and the characters had multi-layered personalities. It was appealing to both children and adults; as it contained an underlying social commentary, touching upon such themes as environmentalism. As well as great performances from notable voice talent like Tom Kenny (of Spongebob Squarepants fame) and Kath Soucie. Over the years; The Cramp Twins has gained a following among fans that still remember it, and is one of the most under-appreciated shows of the 2000s decade.

Sadly in 2005, the show was cancelled abruptly. It's a shame because it had more story-potential and that there were stones left unturned. To make matters worse, creator Brian Wood has not done anything else since. Fans were upset by this, and we could only imagine where it could have gone if it continued. Which is why it’s about time the terrible twins got a revival. For this to happen, it must be made under these following requirements.

By signing this petition, you will make sure The Cramp Twins gets the closure it so rightfully deserves. Let the show tackle themes and story lines it didn't have the chance to do. Only you can make a difference. When this agenda reaches its goal; it'll be sent to a number of producers, in order to convince them that we want Wayne, Lucien and the folks of Soap City to get the ending they deserve. Even if it's just a one off special, please give Brian Wood and his brainchildren another chance.