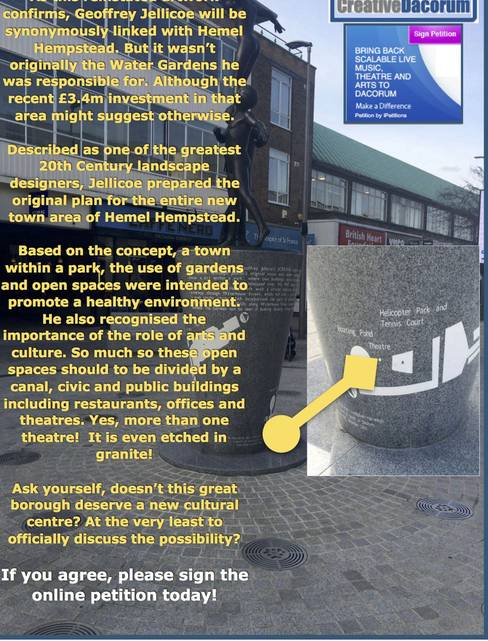 Bring back scalable live music, theatre and arts to Dacorum

While realising the tough financial position every local authority in the UK is in, Creative Dacorum is petitioning Dacorum Borough Council to reopen the business case of funding/part-funding a new cultural venue built in the Borough. After all, this was what was promised a number of times after the Dacorum Pavilion closed.

Built in 1965, demolished in 2002, the Dacorum Pavilion was much more than a theatre. It was a multi-purpose community focal point. And or most of its tenure, it was a bastion of civic pride for a cross-section of a fast-growing, prosperous population. However after almost 40 years, few would argue, in order to serve the whole community it required significant re-investment - both in the its fabric and operation.

Dacorum Borough Council commissioned a series of reports in to the validity of retaining the original building. In 2001 a reported £1m had to be spent on essential maintenance - just to keep the Pavilion open. On top of this , it was suggested at least £1.3m was required on key repairs and refurbishment. This was in addition into the annual subsidy of £900,000 paid by the council to maintain the venue’s cultural programme.


In 2002 Dacorum not only lost it’s only large-scale music and arts venue. It lost the opportunity to enhance community spirit. A venue that played host to indoor sports and provided an environment for the likes of Clapton, Bowie and U2 to tread its boards.

The biggest district in the county

Dacorum Borough is the largest district in Hertfordshire, yet its council spend less than half national average on supporting arts, culture and heritage. Dacorum Pavilion ended up a shabby shell, not designed to cater for a diverse, expanding community. However since it closed, and in the face of a growing population, there are less cultural activities on offer now for the whole community to enjoy.

Despite its so-called commitment to arts and culture, Dacorum Borough Council is now content with devolving its own cultural responsibility to charitable trusts, while attempting to attract private, commercial enterprise in its town centre 'leisure anchor' space.

Dacorum Borough Council spend more on sports provision than its main arts and culture asset, This is not a call to cut £Sport, but a call to be more creative in its £spend on arts, culture and heritage.

Dacorum Borough Council's largest-owned community asset, is the Old Town Hall. While this plays an important role, does it really represent value for money? Does it really service the entire borough with a quality, scalable cultural, theatre, arts, music and sports programme? This 120-seat theatre, cafe bar and cellar rooms is expensive to run and maintain. Other councils elsewhere subsidise much bigger venues with much less money.

At least look at the possibilities
The various council-commissioned studies suggested the district could support a new venue. And while some of these reports are now more than a decade old, they were still contemporary enough to include a market competitor analysis. Watford, Dunstable, St Albans, Aylesbury and High Wycombe were taken into consideration when a Dacorum Pavilion replacement was agreed, and yet the Borough has nothing.

The continuing argument for not even considering funding/part-funding a new venue is generally pre-fixed with 'the current financial climate'. Few would argue for local authorities, as well as its residents funds are extremely tight right now. However, as already demonstrated with the thus far failed attempt to lay a brick for the Dacorum Pavilion replacement, the design and planning - let alone the construction phase, of a new venue takes years anyhow. Therefore would it not at least be useful to entertain the idea of an official, DBC feasibility study looking at how it could at the very least part-fund a new flagship venue? This endorsement might help to encourage a private investor to get involved in such a project.

Maintaining the line, the council should not consider funding/part-funding a new venue is blinkered and lacks foresight. Apart from the cultural impact a new venue would attract, there is arguably the more important economic significance a large, regional cultural centre will generate.

A new venue should be considered anywhere within the Borough and not ‘emotionally’ tied to Hemel Hempstead town centre. We can all see the town centre evolving and the more obvious spaces being taken up with other buildings

Dacorum Borough Council, please consider commissioning a new report for a new venue for a new century. This petition is not about funding a new venue right now. It's about getting you to at least consider the idea of a new venue that the whole community can enjoy and be proud of.

If you agree, the council should take this seriously, please sign this petition, and let others know about it too. We need a groundswell of support to be taken seriously.