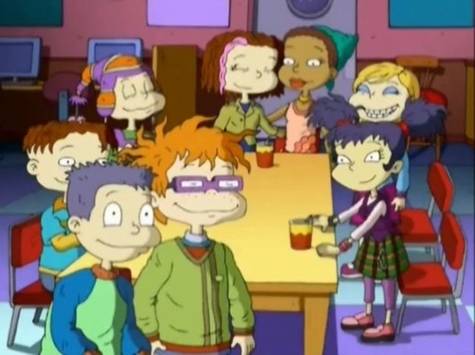 Bring Back Rugrats/All Grown Up

Hello, this is Marcus (Mark) Kyle Mackezno here. Today, I want to talk about one of Nickelodeon's three OG shows back in 1991: Rugrats. The main focus of the show was about babies who were in wacky situations. The show even had a movie called The Rugrats Movie (1998), Rugrats In Paris (2001), and Rugrats Go Wild (2003), which was a crossover of Rugrats and The Wild Thornberrys, which was also another great Nick show. Sadly, Rugrats ended in 2004, after airing for 13 years, which is pretty long! They then had a spin off called All Grown Up, which I think followed the original babies grown up and in middle school, with of course Angelica being the oldest. Now, All Grown Up started in 2003, even before Rugrats was ended, and sadly also ended in 2008, after 5 years of the show. Now, the characters are comedic, and I wish you can make more episodes of All Grown Up and Rugrats (Well, maybe not Rugrats, since that storyline might have been complete), but still make more ALL GROWN UP EPISODES! I want some fresh new plots and things to happen to these babies-turned-middle schoolers. Goodbye, and with love from Mark Mackezno.