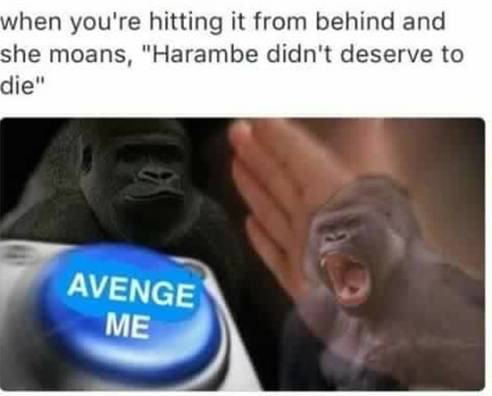 On May 28, 2016, a three-year-old boy visiting the Cincinnati Zoo fell into the moat at the Gorilla World habitat. Witnesses claim they heard the child say he wanted to go into the gorilla enclosure. The boy then climbed a three-foot-tall fence, crawled through four feet of bushes and then fell fifteen feet into a moat of shallow water. Zoo officials immediately signaled for the three gorillas in the habitat to return inside, and two females did so. However the third gorilla, the inquisitive 440-pound male silverback, Harambe, climbed down into the moat to investigate the child splashing in the water. Over the next 10 minutes, Harambe became increasingly "agitated and disoriented" by the screams of onlookers. He dragged the child through the water, occasionally propping him up when he sat, or pushing him down when he stood. Harambe exhibited "strutting" behavior - walking around with legs and arms stiffly extended to appear bigger - a bluffing move, though one with inherent danger should he throw or drag the boy around too roughly. Harambe then carried the boy up a ladder out of the moat onto dry land. Afraid for the boy's life, zoo officials made the decision to kill Harambe, doing so with a single gunshot. It was one day after his 17th birthday. Cincinnati firefighters said the boy was between Harambe's legs at the time the shot was fired. The incident was recorded by a bystander and uploaded to YouTube, where the video went viral. The shooting was immediately controversial, with some observers stating that it was not clear whether or not Harambe was likely to harm the child, and others calling for the boy's parents and/or the zoo to be held accountable for the gorilla's death. Zoo director Thane Maynard stated, "The child was being dragged around ... His head was banging on concrete. This was not a gentle thing. The child was at risk." Police investigated possible criminal charges against the parents, while the parents defended the zoo's actions. The boy's mother became the target of online harassment. On June 6, 2016, Ohio prosecutor Joseph Deters said that the mother would not face any charges of wrongdoing. The Zoo was investigated by the Association of Zoos and Aquariums (AZA), which sets the standards for zoos, and the USDA. Many experts gave their opinions. It sparked debate among biologists and primatologists on whether gorillas and other primates should be held in captivity at all. Primatologist Jane Goodall said that according to the video it seemed Harambe was trying to protect the child. Goodall later issued a longer explanation on her website, concluding that Harambe needed to be killed. "It was awful for the child, the parents, Harambe, the zoo, the keepers and the public. But when people come into contact with wild animals, life and death decisions sometimes have to be made." Goodall clarified that as long as humans and wild animals are kept in close proximity in zoos, there is no way to prevent accidents from happening, but "I do believe that zoos with the highest standards of care can play an important role", Goodall said. Harambe was born at the Gladys Porter Zoo in Brownsville, Texas. He was named by Dan Van Coppenolle after the 1988 Shanachie Records song "Harambe (Working Together for Freedom)" by Rita Marley. On September 18, 2014, Harambe was transferred to the Cincinnati Zoo and Botanical Garden to learn adult gorilla behavior and join a new social group. At the time of his death, Harambe weighed 440 lb (200 kg).