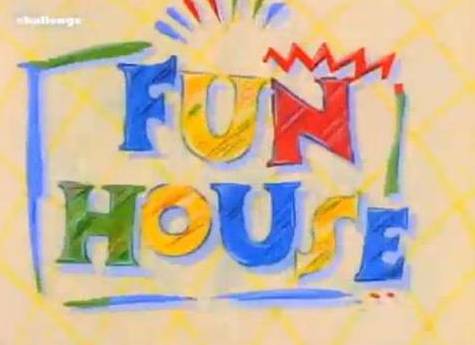 Bring back Funhouse with Pat Sharp!

Fun House was the grand daddy of kids gameshows, one of my only dreams as a child growing up were to take part in it...i never got the chance and it sadly ended after a ten year run.

Loads of games were devised with the sole purpose of having the teams slip, slide and slither their way to the most exciting finale of any game show-'The Fun House Run'.

The format was very simple. Two teams, one boy and one girl, representing their school competed against each other. There were 3 messy games each separated by a 'Question and Answer Round' which then led to the penultimate game- 'The Fun House Grand Prix'.

Although the details of this item changed over the years, mainly to reflect the movements in Formula 1 rules, it was always the most thrilling, most exciting, breathtaking motorised game on CITV. The chequered flag was always the great climax to a fantastic race. Again over the years new technology was used to make the race even more exciting. The development of smaller mini-cams set on the cars let the viewers experience the sensation of actually driving the karts.

Then the moment of truth arrived. The final scores were totted up and the teams found out which of them were going to have one of the most exciting experiences of their lives. They were going into the 'Fun House'.

All through the show everything had been played against the backdrop of this amazing structure. Towering over everything, this multicoloured, multi -level construction had dominated the proceedings. No adult was ever allowed to go into the Fun House. It was strictly a children only area.

The different levels of the House were connected by bridges, ladders, firemans poles, chutes, slides and bobsleighs. Hidden all over the house were 15 tags, each of them representing a prize. The teams had to work out the best route to pick up as many prizes as possible. One of the tags was the key to the "Power Prize" which gave them the chance to win a really huge prize like a holiday.

Fun House was the most exciting mix of elements ever put together in one game show, proven by the exceptionally long run that the series had on CITV. Not to mention the most catchiest theme tune ever for a children's TV programme!

Unusually the presenting team remained unchanged throughout the run. They were Pat Sharp and the twins Melanie and Martina Grant.

I have started this petition to bring back the childrens TV classic, but instead aim it at families, let adults get in on the funhouse action, you could even do celebrity funhouse for charity, there are a TON of ideas for a show that could easily make a massive comeback, and i know full well that Pat Sharp himself would love this to happen!!

SO LETS MAKE IT HAPPEN!! SIGN THE PETITION TODAY! :D