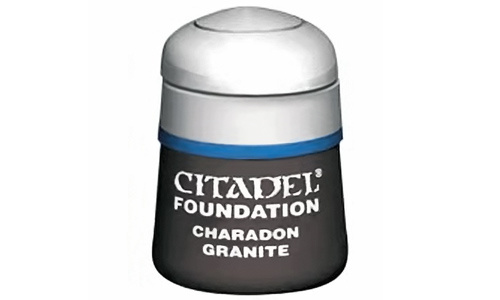 Charadon granite
It's not quite grey, not quite brown, is it sort of green?
Whatever it is, it's known by many painters as magic in a pot.

Back in 2007 Games Workshop released the foundation range of paints. 18 pigment heavy paints designed for better coverage. These were a massive hit back in the day and many painters were worried when the entire range of Citadel paints was revamped five years later.
Most of the foundation paints got a great replacement. Iyanden Darksun became Averland Sunset, Mechrite Red got replaced with the fantastic Mephiston Red.
But what about the good old Charadon granite?

If you google "Charadon granite" you find forum thread upon forum thread created by people searching for a fitting replacement.
When the current range of paints hit the shelves back in 2012 Games Workshop provided us with a conversion chart, and according to that, Stormvermin fur was supposed to replace Charadon Granite.
It doesn't though, and neither does any shade from Vallejo, Reaper or Army Painter.

We are many who still mourn the loss of this glorious paint and given how Games Workshop really seems to listen to their fans these days and considering how they release single pots of new paints from time to time I thought this would be an ideal time to create this petition.

Charadon is the capital world of an Ork pocket empire, situated in the Imperium's Segmentum Ultima.
And you know what they say about Orks?
They always come back for anuvver go!