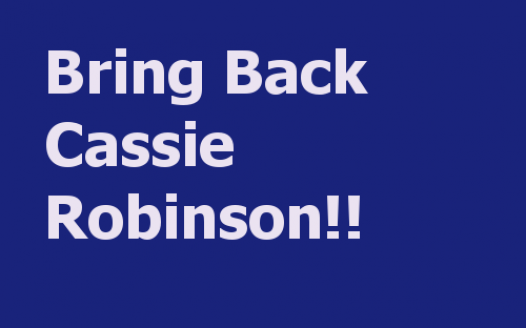 To the writers of the supernatural TV Show, Robert Singer, Sara Gamble, Phil Sgriccia and others:

The problem we have is a lack of Cassie Robinson in the Supernatural tv show World. She needs to pass through in Season 13 alive and well or become a semi regular on the spinoff, Wayward Daughters.

--One reason we are asking this is during the episode that Cassie Robinson appeared(Season 1 Episode 13) it was apparent that she MEANT something to Dean beyond a one night stand. He even promised to return at the end, he said aloud it was something that was just alluded to.

--The fact that she has not appeared in all these season seems ODD to those who have waited patiently for her return. Not so patiently at times but the idea that he has NEVER had any moment of thought of her Even when reading the Supernatural books with the same name of the episode, that was just Weird.It was as though she was Wiped from the records, newer fans do not even know who she is, especially with Misha's Castiel being called Cas, which is can be confusing.

--Also we loved the chemistry of the two of them, it brought out a more special side of Dean something we Never saw with anyone else especially Lisa.

These are the main reasons to bring back Cassie Robinson to the Supernatural TV show she is a part of canon. Please schedule her either for season 13 or in the planned spinoff. Thanks for reading.