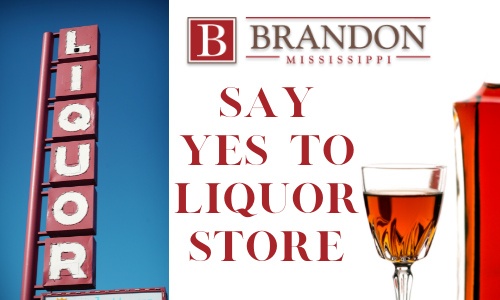 WHAT IS THIS FOR? This petition is to show support for a liquor store inside the city limits of Brandon MS (zip code 39042). The City of Brandon already offers liquor by the glass at restaurants, but we need a liquor store inside our city limits. Currently, those in the area have to drive to Jackson MS or to unincorporated areas near the Reservoir, in order to purchase liquor, thus sending liquor sales and tax revenue outside the city limits.

We are not suggesting that our city should have 10 liquor stores, but we are in favor of 1 or 2 properly placed liquor stores, to provide options for our citizens and to keep revenue inside our city. We trust the City of Brandon Board of Aldermen to select proper locations, size, appearance and number of locations. Such a store(s) would likely be patronized by non-Brandon (city) citizens, such as visitors to our city, as well as those in neighboring communities (incl but not limited to Puckett, Johns, Cato, Pelahatchie, etc).

WHAT IS THE APPROVAL PROCESS FOR A LIQUOR STORE IN THE CITY OF BRANDON? According to our research, the ONLY requirement needed is a majority vote of our Board of Aldermen. A public vote is not needed, nor is a petition such as this. There are 7 aldermen for our city, which is 1 per Ward (6 Wards) and 1 Alderman-At-Large. You can view the Aldermen on the City of Brandon website HERE. You can also find each Alderman's respective email address on that page.

WHY THIS PETITION? While we believe our city administration to be very knowledgeable and capable, we feel this petition is necessary to show support for this effort. Without it, our Board of Aldermen may think that citizens of Brandon are not interested in having a liquor store. Our city approved liquor by the glass in 2013, and we feel it's time for our Board of Aldermen to consider approving a properly placed liquor store.

OTHER IMPORTANT INFO:
Please use your REAL NAME when signing this petition. If an alias is used, it will not be relied upon nearly as well by city officials. Your email address is not visible online, nor will signers' email addresses be provided to city officials.

We thank you for your support with this petition, and look forward to its presentation to our city officials. Cheers!