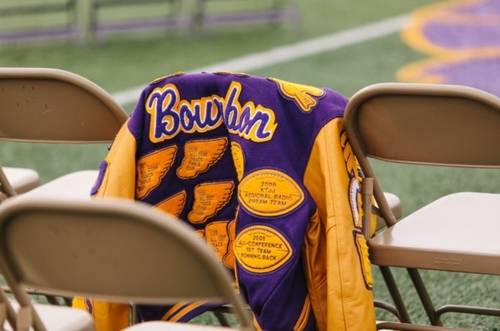 Brandon Bourbon is a record holder for the state of Missouri in Football and Track. He's earned many awards, medals, and trophys for not only his athletics, but also for his academic success and unfaltering character. After high school he attended KU where he earned a bachelor's degree in business and a minor in sports management. He also attended Washburn University. His football career allowed him to have many opportunities such as collegiate offers from some of the most prestigious academic institutions in the nation; Stanford and Harvard..among many others. Brandon gave to the community often. He was even once rewarded by Mo State Representative Paul Fitzwater for his assistance in a car accident. As you can tell, Bourbon was a rare combination of compassionate, passionate, and intelligent. Our goal is to honor and remember a bold, talented, hardworking, and loving individual who has, without a doubt, earned the privilege of having the local football field named after him. The Trojan football field is where Brandon fell head over heels for the game. It's where he spent most of his time and it's where his family, friends, teachers, coaches, and teammates told him goodbye for the very last time. We want to make it his home. Please add a signature to support our cause.