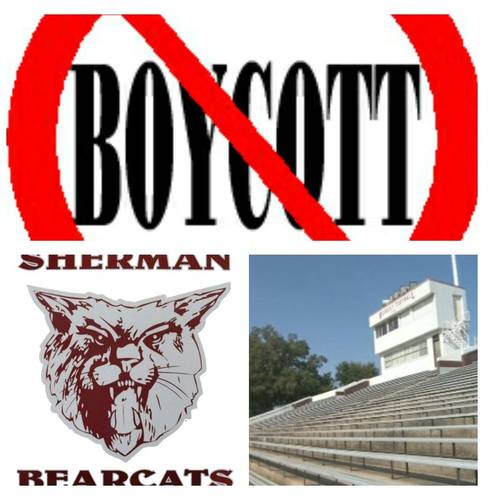 PLEASE READ BELOW THE FOLLOWING INFORMATION FROM KXII. THIS PETITION IS TO BOYCOTT THE STADIUM UNTIL A REASONABLE SOLUTION CAN BE MET THAT BENEFITS THE STUDENTS, PARENTS, AND STAFF.

SHERMAN, Texas -- Sherman Independent School District released a new policy regarding conduct at Bearcat Stadium and it caused an uproar among fans.Sherman Bearcat fans aren't exactly cheering about a new set of rules at the football stadium"I do not believe in the enforcement of telling a 16-year-old or 18-year-old that they have to get permission to go to the bathroom," Sherman High School parent Crystal Blackwell said. "It is kind of overstepping bounds.When Sherman HS released Wednesday, students went home with a letter from principal Peggy Van Marter.

All the kids were really upset, talking about how their rights as a student in the student section was taken away," student Adam Maher said.

The letter outlined new rules for Bearcat football fans.
It states general admission students will be assigned to a row based on their class.

Students will also need to ask permission to use the bathroom or get food before and after half time."We don't want to squash school spirit," Asst. Superintendent Tyson Bennett said

Bennett says the policy will help keep fans from lingering in the stadium's foyer.

"We wanted to make sure we have students in the stands for safety purposes and in the stands to cheer the team on," Bennett said.

Boos from parents and students have caught the district's attention but officials are saying 'better safe than sorry' when it comes to safety.

"I think the school spirit passes down to the field and the boys hear it," Blackwell said. "It affects everyone."Elementary age kids are required to sit with an adult and students are not allowed to exit and re-enter the stadium.

The rules start Friday, Oct. 2nd and Sherman ISD says there is no specific incident or cause linked to the new rules.