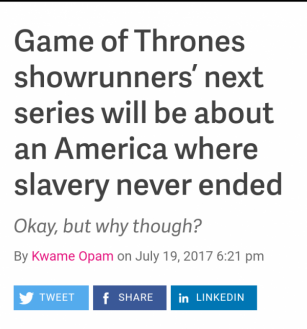 The duo team David Benioff & D. B. WEISS, creators of the hit TV series "Game of Thrones" are gearing up for their new show "Confederate" that has been given a series order from HBO. The series will be about an alternative to the Civil War where the South won & slavery is still legal & has grown into a "modernized institution".

We can't sit back and let this happen without a fight. How is it possible to even promote something that depicts such an idea?. With the rise of the Black Lives Matter movement & the many wrongful murders without convictions, this is a spit in the face. Racism is a front row debate for many problems we have in America today & a show of this nature will only make matters worse.