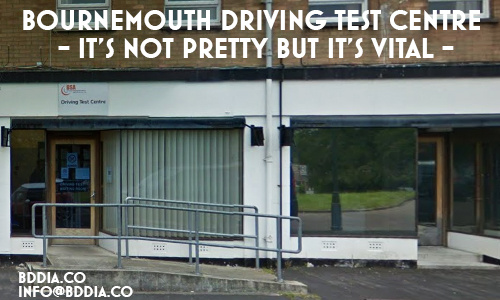 Bournemouth unexpectedly lost its Driving Test Centre to flood damage in February 2019, and car driving tests are now having to be taken in Poole, several miles away. This is causing huge inconvenience and extra expense for already stressed candidates and driving instructors alike.

This petition is to be submitted to the officials who run the driving test centres nationally - the Driver and Vehicle Standards Agency (DVSA). The DVSA has not yet committed to either reopening the Bournemouth centre, or to finding another equally suitable location.

There is now talk of permanently relocating all tests to Poole.

There are two primary reasons why Poole is not suitable.

1. The distance some candidates now have to travel to get to test.

2. The Poole site itself.

Candidates from central Bournemouth, and places such as Christchurch, Ringwood, Verwood, and outlying Bournemouth districts such as Tuckton, Iford and Southbourne, now have to make long journeys through some of the most congested roads in the country, just to get to take their tests. Even before learners are ready for test at least some training now needs to be carried out in far-off Poole.

instructors are having to charge extra to cover increased time and fuel costs, adding to the overall expense of training and the test day itself. Those who don't charge extra are shouldering the extra costs themselves. There have reportedly been cases of candidates being caught in traffic and missing their tests.

The site is a poor place for carrying out driving tests for several reasons including awkward entry and exit points and a dark and overcrowded waiting room. Entering and leaving the facility usually involves driving alongside many large commercial vehicles. None of this creates the right atmosphere needed for candidates just about to take a driving test.

Please sign our petition to Keep a Driving Test Centre in Bournemouth. We need to encourage the DVSA to listen, and this petition will visibly demonstrate the high level of support we are receiving from instructors and the public alike.

Bournemouth and District Driving Instructors Association (BDDIA) - working on behalf of all local driving instructors and their customers, members and non-members alike.