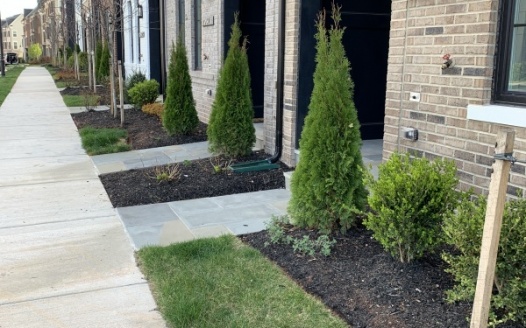 Black Mulch for The West Village

This is a petition by West Village residents to the One Loudoun HOA Design & Covenants committee to grant our neighborhood with a variance from the Association’s current standard, which would call for the exclusive use of black mulch throughout the landscaping of the neighborhood, as was originally included and intended by Miller & Smith's development team. The success of this petition would essentially just mean that going forward, the HOA's landscaping contractor would use the same black dyed mulch throughout West Village as we originally had from the builder (instead of the standard brown mulch which was put down this week).

As we all know, Miller & Smith specifically designed and intended the West Village architectural and landscaping aesthetic to differ from those of other neighboring developments here in One Loudoun.

To that end, West Village homes were all built with uniformly black windows, black doors, black roofs, black gutters, black garage doors, and black trim - all of which are unique from previously built adjacent Miller & Smith developments that included many brown and beige design elements.

West Village residents were sold homes which originally included unique landscape features such as black mulch and high quality blue/gray stones between our driveways — both of which differ (and do not conform) to the current One Loudoun HOA standards which have been in place since before the construction of the West Village.

Additionally differentiating West Village from other neighboring One Loudoun developments, Miller & Smith developed a private community park within the neighborhood designed for the exclusive use of its residents — which carries its own special assessments paid for by West Village owners only.

Lastly, multiple West Village residents have also already made significant investments in intentionally purchasing & installing black colored landscaping trim (all of which could not be easily removed nor inexpensively replaced) in order to match the original black mulch color, as well as black hoses, black lawn irrigation equipment, and even extra bags of black mulch which would no longer be useful.

For those reasons, among others, it is our firm belief that the use of black mulch — which was even included on the model home properties used to sell the rest of the development — should be viewed as a key component to maintaining West Village’s unique and uniform aesthetic — which is why we’re requesting the HOA grant a variance for the inclusion and exclusive use of black mulch within the development going forward.