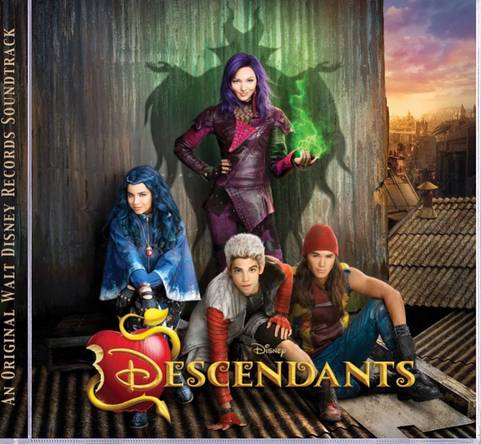 I think that the Disney Descendants soundtrack deserves a nomination in the "Top Soundtrack" category for the 2016 Billboard Music Awards. Here's why: The soundtrack was the fourth soundtrack to hit #1 on Billboard 200 in 2015. The soundtrack has two songs from there that hit the Hot 100 charts, one of them being in the Top 40. The soundtrack has sold over 200k copies, probably over 300k counting the new rules. This is the first Disney Channel Original Movie soundtrack to hit #1 on the Billboard 200 chart since High School Musical (Past winners at the BBMA's, also created by Kenny Ortega). Disney Descendants has became a worldwide hit for kids and more today. The movie has won a Writers Guild Award and Directors Guild Award. The music videos to the songs has calculated tons of views on Vevo. Rotten To The Core is Vevo Certified with over 150 million views and If Only is approaching it's Vevo Certification. Being nominated at the Billboard Music Awards would be awesome for the soundtrack and the cast. I've heard that nominations are based off sales and Year-End charts. Descendants fits that requirement. Tweet #BBMAsNominateDescendants on Twitter and post the tag on Instagram with photos while tagging the award show + Billboard. Let's get the cast a nomination. They truly deserve it. Our hard work and the success of Descendants just can't go unnoticed. If it ends up going unnoticed, Descendants 2 is in the works and we'll be back going harder than ever for this breathtaking sequel we're about to witness. - @Descendants2015!