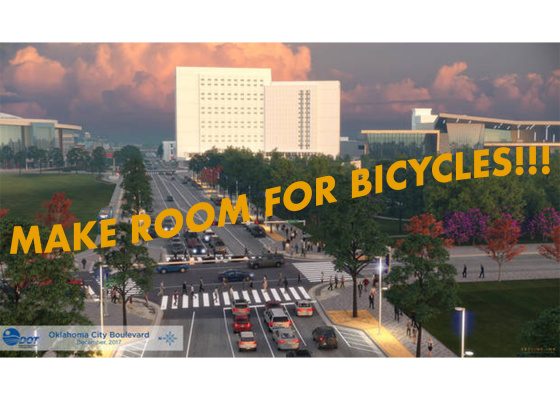 Plans and renderings for the new Oklahoma Boulevard have been revealed to the public and they do not include bicycle facilities. Instead, pedestrians and cyclists will be required to share the sidewalk, creating a potential dangerous and unpleasant atmosphere for all users.

BIKE LANES/FACILITIES NEED TO BE ADDED TO OKLAHOMA BOULEVARD.

Oklahoma City is better than this. Let's be inclusive, let's be smart, let's be equitable. Let's be world-class.

We urge the City of Oklahoma City to include bicycle facilities that are separate from the sidewalk on the new Oklahoma Boulevard.

Thank you for your attention to this important concern.