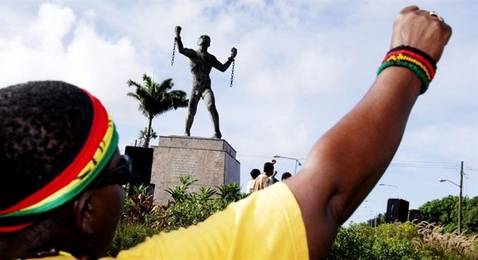 Big Up Bussa for Independence

Barbados is getting ready to celebrate 50 years of independence, but it seems to have forgotten 200 years of rebellion from the same oppressive slave system that it celebrates its breakaway from. In 1816 General Bussa was instrumental in an uprising of slaves against their masters and the tyrannical system of slavery. This can well be seen as the first blow thrown in Barbados for our struggle for independence.

The white plantation owners were totally caught off guard. The slaves fought valiantly against the troops of the First West India regiment and it was reported The rebellion spread from plantation to plantation until about half of the island was caught up in the insurrection. It took four days for the authorities to regain control. Bussa was killed in battle, and the ringleaders were executed.

Although the rebellion ultimately failed, it was never forgotten. In 1985 more than a century later, the Emancipation Statue was erected at the roundabout in Haggatt Hall, St Michael. In 1999, Bussa was named as one of the national heroes of Barbados." Taken from itz Caribbean

As roundabouts all over the island are decorated for the independence celebration it seems that this roundabout at Haggat Hall has been left out.It would stand to reason this particular roundabout should be decorated the best as it should represent our first step to independence. Why have we forgotten the sacrifice General BUSSA made for us? The sacrifice of his life for ours should not be scoffed at and tossed aside.

This petition is being done in the hope that someone in the Ministry of Culture, Commission for Pan African Affairs, Prime Ministers Office will respect our ancestry and ancestor enough to address this grave insult to the champion of our freedom. I suggest if they can't deal with it, any one or all three of those offices empower a Pan African Civil Society Organisation to host a celebratory activity near the BUSSA statue.

Maybe, just maybe if the nation speaks up loud enough action will be taken. 7 million for independence celebration and not a cent for BUSSA.

If you agree with the African Heritage Foundation on this point of respect and order please sign this petition to Big Up Bussa and share it with friends and family.