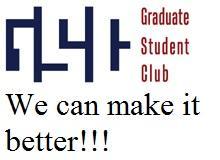 I attended the election of the GSC few days ago and I witnessed a lack of clearness in the electoral procedure. I really believed in the good will of the last year committee considering what I have witnessed in the last year and a half. This work risks to be compromised by the lack of clearness justifies people to think that this body is composed by people chosen by an inner circle of friends and not by a democratic representative of the graduate students.

I ask to make a committee together with the current GSC in order to rewrite the GSC statute that is based on the following points and the document provided to you in the email with the link to this petition in order o achieve a better democratic representation of the NTU graduate students community.

1. Election of the president and of the Graduate Student Council which will be composed by 30 people that will select among the committee directors.

2. New Electoral Rules and evaluation system of the candidature which will introduce more transparency.

4. Not only benefit but also duties and penalties to all the students that decide to take part of the GSC.

5. Allowing student outside GSC to propose new rules if they represent a relevant part of the student population.