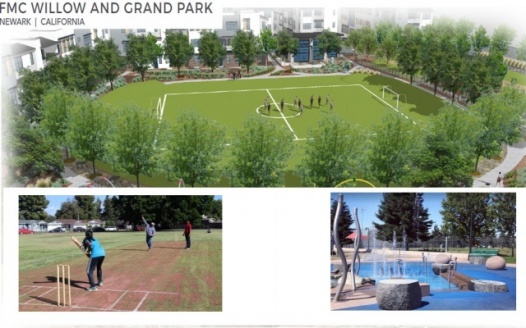 I would encourage the City of Newark, California to consider offering better playground / outdoor options for the Grand Park in the Bayside TOD than that are currently in the proposed Willow / FMC project.

- Multi use sports field - for Cricket and Soccer (not only Soccer)

a. Given that a large number of residents in Bayside are from Indian subcontinent, would it be possible to get a cricket pitch in the middle and some striping on the sides of the Grand Park or Parcel F park (close to the transit station)

b. Given that a large number of residents in Bayside have young kids, it will be great to have a Splashpad area close to us for summers. Currently families have to visit neighboring cities to access summer splashpads. Splashpads recirculate the same water and tend to be very drought efficient installations as can been seen by a lot of neighboring cities having similar facilities in place.