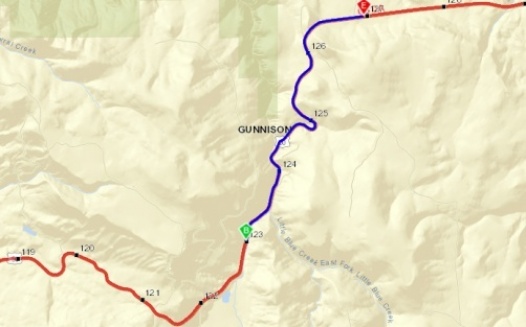 447 people have signed this petition. Add your name now!

This petition is to raise awareness of the US HWY 50 Little Blue Creek Canyon Project traffic closure and the intense economic pressure that this will put on the Western Slope if the Colorado Department of Transpiration (CDOT) does not allow for better hours of travel going east and west on HWY 50. CDOT wants to improve Highway 50 between Montrose and Gunnison in the Canyon known as Little Blue Canyon. Please, sign this petition to support a proposal that will keep US HWY 50 open an extra hour on each open period per day, as opposed to the current proposal to have the road open just 2 hours hours in the morning, 1 hour at noon and 2 hours in the evening per day. Keep in mind that "open" means alternating single-lane traffic at slow speeds.

This project is needed, but the current proposal for this project could suffocate businesses throughout Southwestern Colorado. The project will take two years to be finished and during that time the road will only be open five total hours per day. Monday - Friday, during the project, the road will be open for single lane use in an alternating traffic operation at 6:30 AM - 8:30 AM, 12:30 PM - 1:30 PM and finally in the evenings at 5;30 PM to 7:30 PM. At all other times of the day, the road will be completely closed, until November of 2022. CDOT has stated that the best alternative route around the project is CO HWY 92. This detour increases travel time between Montrose and Gunnison by an hour and fifteen minutes. It should also be known that trucks longer than 65 feet are prohibited on travel on CO HWY 92, so larger trucks will be forced to travel to travel on Interstate 70 or wait for the short open intervals on HWY 50.

New Proposal: The proposal that this petition supports increases the lane operation an extra hour on each open period per work day. This new proposal will allow for more people to travel on the road, but more importantly, it gives longer intervals for emergency vehicles to pass through in the case of injury or accident. Heavy trucks bringing food and other supplies will also be able to travel the canyon to reach areas of Southwest Colorado without having to take Interstate 70 and suffer the increasing congestion. Most importantly, Southwest Colorado's economy will not bear quite as devastating an impact with this new, less obtrusive, proposal. Due to the increase in time the road will be open, this proposal will extend the project's completion to October of 2023. This extension in time does increase the estimated cost of the project from $38 million to $46 million. It is our belief, even with the increased in costs, that Southwest Colorado should not have their economy suffocated while it is trying to recover from a pandemic-induced recession.

Please, sign and show your support for the US HWY 50 Little Blue Canyon Project proposal that better aligns with Southwest Colorado's economic health.

The official project proposal can be found at http://www.us50info.com.