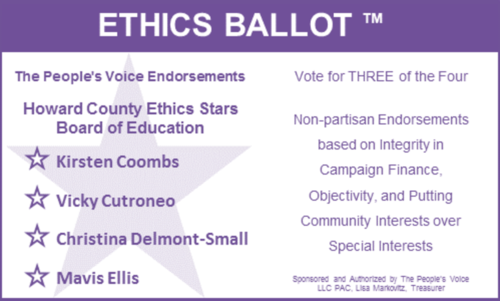 Better Board of ED

Deny Re-election to the Board of Education Incumbents

The Howard County Board of Education renewed the contract of Superintendent Foose by a 5-2 vote. Now it's OUR TURN TO VOTE.

Please Click Here to Donate to The People's Voice LLC PAC to help elect non-incumbent candidates who we have researched and endorsed - see the Ethics Ballot above. For more information on these candidates, you can read their brief bios here.

If you have not already, please sign this NEW petition so we can stay in touch via email.

It is time to DENY re-election to Ann DeLacy, Ellen Flynn Giles and Janet Siddiqui, the three incumbents up for re-election this year. There was no public response to the petition issues from Siddiqui nor Giles. DeLacy's public response was that the numbers upset weren't enough compared to the total population of Howard County!

Then, they renewed Foose in a "public" meeting where the public was physically barred from entering. See this video for a story on how they also manipulated testimony.

Note BIPARTISAN agreement on the problems with this BOARD OF EDUCATION.

"It seems to me that they treat the public with absolute disdain, and then they go back to try to figure out how to manipulate within the system to treat them with disdain again...We spent years to build a class school system with hard work from school board members, teachers, parents, paraeducators, county officials....", said Delegate Terri Hilll, who grew up in Howard County, " and it is very upsetting to me to feel like we are somehow having to stand on the sideline and watch all of that melt away."

"It's not normal activity for a board or public school system to do some of the things that they've been accused of" Delegate Warren Miller.

"In Howard County, we have an issue to be resolved to restore public trust," Delegate Bob Flanagan.

The MANY REASONS NOT TO VOTE FOR DELACY, GILES and SIDDIQUI are listed below in addition to their dismissive and disdainful attitude toward their constituents.

REASONS NOT TO VOTE FOR DELACY, GILES and SIDDIQUI:

IMPACT on TAXPAYERS during this Board's tenure:

Elimination of the Citizens’ Operating Budget Review Committee - the group that provided public oversight of the proposed school budget (which is the majority of the Howard County taxpayer’s budget). [source] 59 cents of every dollar of your tax money is in their budget!

Elimination of the HCPSS in-house attorney, incurring much higher costs for outside attorneys [PDF] [PDF] who have a financial incentive to litigate over working with parents, teachers and students to resolve disputes. [PDF] Sanctioning a special education mom with almost $9000 in sanctions for attempting to obtain a public document, more herein below.

Hiring an attorney for the Ethics Panel who was fired from Prince George's County Public Schools for unauthorized use of school funds. [source] [PDF p16 (last page)]

Spent over $10M last year on sole-source (non-competed) contracts. Chose to spend hundreds of thousands of dollars on renovating the Board of Ed room [PDF] and a social medial consultant for the Superintendent and Board of Education [PDF] [PDF] while getting rid of direct support for teachers and students by eliminating paraeducator positions and increasing class sizes. Spent twice as much as Montgomery County on a special education audit. [PDF] [PDF]

IMPACT on Parents during this Board's tenure:

Parents were not informed about known mold problems at Glenwood Middle School. When school staff wanted to tell parents, they were silenced. Mold was characterized as a “maintenance issue” - rather than a health issue - that did not need to be revealed to parents. Both students and staff with mold allergies suffered on-going illnesses. [PDF] [PDF] HCPSS employees recently won Worker's Compensation claims.

There are other examples of non-compliance with the MD Public Information Act. [PDF] [PDF]

IMPACT on Students during this Board's tenure:

BULLYING was IGNORED. Grace McComas was a bright, kind, and well-adjusted 14-year old who committed suicide on Easter Sunday, 2012. A drug-assisted sexual assault by a Glenelg High School student was not investigated, and Grace endured months of sexual harassment and bullying, which was reported to the school system. Next to nothing was done in response. Title IX of the federal Education Amendments Act, which describes a school’s responsibilities to address sexual harassment and sexual violence, was not followed, according to a parent. The family requested Grace’s counseling records, and have not received them. Several requests were made from June 2011–2014. Although legally required to do so, the HCPSS has not responded. [source] [source]. Grace’s Law, the child protective Maryland law against cyberbullying in Maryland, is not being properly communicated to families and victims. [source].

Special Education students have had a particularly difficult time getting proper attention. Funds were removed each year from the special ed budget. The cutting of paraeducators affects them more, and parent requests for proper resources has not only gone unheeded, but has produced inappropriate antagonism. [PDF] [PDF] [PDF]

Suspension rates are higher for African American students in the HCPSS. [source]

Recently a widespread email by HCPSS leadership condemned a racist video, yet an African American student who condemned the video was suspended.

IMPACT on Teachers during this Board's tenure:

Recently retired teachers have spoken at hearings saying they were afraid to complain for fear of their jobs. There is not an atmosphere of open communication, not with the public and not with the staff. [source]