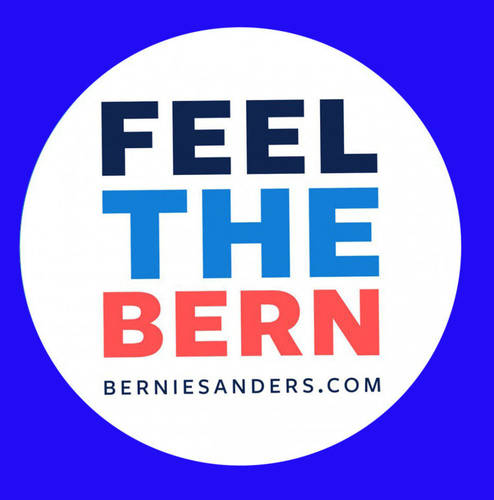 Bernie Sanders Supporters Who Are "Not With Her"

We are Senator Bernie Sanders supporters, and Hillary Clinton and the Democratic Party have not earned our vote.

We are Bernie Sanders supporters. We are not “Bernie Bros”, we are not “Berniacs”, we are not the host of other names assigned to us by the media and other groups within the Democratic Party to demean us and attempt to shame us into changing our votes. We are long time democrats who were re-energized by Senator Sanders proposals. We are converts from the Republican Party who were swayed by Senator Sanders’ plain-speech explanations of reasons for the economic issues America faces. We are converts from other parties who respect Senator Sanders’ long held commitment to his core values. We are first time voters who finally felt like we had a candidate worth getting out and voting for. In short we are Americans and voters. You need us, and right now we are NOT “With Her”, or you.

We are Bernie Sanders supporters that are adults of voting age from all walks of life, who supported Senator Sanders based on his ideas, voting record, character, and vision of the future in America, and we’re a little tired of being labeled as “Bros.” We’re tired of having our concerns about the election ignored, and we’re tired of being called stupid for continuing to believe in Bernie Sanders despite the fact that he is not the Democratic nominee for president.

All we hoped for, and all the Sanders campaign asked for, was a fair shot at the nomination. We feel robbed of that based on the following issues...

We felt concern when the Sanders campaign was denied access to the DNC voter database. But you told us that everything was being done fairly.

We felt it was unfair when party superdelegates chose early on to cast their votes in the media, instead of at the convention. Thus giving the impression that Senator Sanders was falling further and further behind and therefore impacting the opinions of the voting public. But you told us that everyone knew the rules before announcing their intent to run.

We felt wronged when delegate votes were changed in Nevada. But you told us that everything was done according to the rules.

We felt upset that at every step of the primary election the Hillary Clinton supporters in the media called for Senator Sanders to drop out. But you voiced very little support to his continued campaign in what should have been a more equal democratic process to elect the best person for the job.

We continue to feel discouraged when the only reason presented to us to vote for Hillary Clinton is to keep Donald Trump from getting elected. But you keep repeating that in every speech.

We feel angry when we are told that a vote for a third party or refusing to vote out of conscience is a vote for Trump. America deserves better candidates from both parties than ones starting with historic unfavorability ratings as we have seen in this election. But you and the Republican party forced this choice on us.

We feel offended that in the face of the leaked email evidence of party bias against Senator Sanders by the leadership of the party, that has without doubt lead to the issues above and affected voting, the only response we hear is that Hillary Clinton got more votes. You told us that it was a fair game. Then you admitted that it was not a fair game. Now you are telling us that had it been a fair game Senator Sanders still would have lost. Based on the fact that Senator Sanders lost the unfair game? And you expect us to accept that?

We are angry that despite Senator Sanders swallowing his pride and calling for party unity among the voters in spite of the above issues, there are still some who say he is not a true member of the party.

And finally, we are down right pissed off knowing that should Hillary Clinton become president, she and her supporters will claim the accomplishment and take credit for unifying the party. When, not even Bernie Sanders, but only his supporters can truly unify the party and win the election for Hillary Clinton.

We are Senator Bernie Sander supporters, but we do not support him blindly or unconditionally as some do for their chosen candidates. We support Sanders out of intelligent consideration of the issues he raises and belief in remedies he proposes. We support him out of conscience when we hear a candidate who speaks from the heart. We support him out of respect for his unwavering stances on the issues throughout his time in politics, even when those stances are not popular or even ones we completely agree with.

An assumption of blind following appears to be the thought process that the Democratic Party is counting on in the general election. We respect his decision to ask for party unity. However, our votes are NOT his property to turn over to you and your nominee. Our votes are precious to us, especially in this election and must be earned. Not by an obligatory concession speech from Senator Sanders or anyone else, but by the actions of the nominee and leaders of the party they represent.

You have apologized to Senator Sanders for his mistreatment, and you have reached out to his campaign officials and proxies. But who will publicly admit to the unfairness of this year’s primary election and apologize directly to his supporters? How will you attempt to make things right with us to prove your sincerity?

Through this petition I suggest an unofficial contract between the DNC and Bernie Sanders supporters so that we can each get at least part of something that means a great deal to us. In return for our support and votes we ask for the following....

1. Out of our respect for Senator Sanders as a member of the Democratic Party; a promise from the Chair of the DNC that no attempt be made on behalf of the party to strip Senator Bernie Sanders of his membership in the party or placement on any committees on which he currently serves, barring a choice to leave the party of his own volition.

2. In recognition of Senator Sanders showing humility, keeping his promise, and remaining committed to defeating Donald Trump, all in spite of mistreatment at the hands of the DNC leadership; give equal credit to Bernie Sanders and Hillary Clinton in all statements, publications, and news releases from the DNC and its leadership on the topic of unifying the Democratic Party in preparation for the general election.

3. In realization of the terrible effect that the deregulation of banks has had on America’s economy, which Senator Sanders fought to educate the voting public about; an addition to the official DNC party platform that the Banking Act of 1933, also known as the Glass-Steagall, act be reinstated. And a commitment from Hillary Clinton to pass legislation to reinstate it, should it be presented to her.

4. In validation of our beliefs and feelings about wrongdoings during the the election process; an admission of those wrongdoings by the party leadership on the above issues during the primary election from both Hillary Clinton (who we assume took part in, but has benefited from them) and the Chair of the DNC.

5. In an attempt to regain our respect; an apology to the voting public for the way that the primary election was carried out from both Hillary Clinton and the Chair of the DNC.

6. In an attempt to regain our trust; propose a plan to be presented by the Chair of the DNC to ensure that such biased conduct by officials whom we are asked to trust will not be possible in future elections regardless of the candidate.

7. In recognition of our hopes to see Senator Sanders continue his political career with the same passion that he possesses now; a promise from the Chair of the DNC, that should Senator Sanders choose to run for office again, up to and including for the Office of President of the United States of America in 2020, that no bias will be shown against him, and that any concerns from his campaign as well as any from the voting public be taken more seriously.

All we ask in this petition is that you do what is right. Both in showing respect to the voters who supported Bernie Sanders, and in showing due respect to an honorable former candidate for the presidential nomination.

We are Bernie Sanders supporters, and we believe that America is more resilient than either party gives it credit for. Despite the attempts to install voting fear in us by both parties, we feel that the American people can withstand four years with either party in change. And if it helps to bring about reform in the two largest parties or the rise of a third party, we are willing to vote our conscience and not accept the “lesser of two evils” choice any longer.

We are Senator Bernie Sander supporters, and the Democratic Party has not earned our vote but maybe it is not too late. We have followed him this far, but don’t assume that we will follow just because he has asked us to. Honestly, we wouldn’t be true Bernie supporters if we followed anyone blindly. True, a few from a crowd will always follow the leader, but we the undersigned on this petition will either withhold our vote in protest in November, or vote our conscience with a third party… or with you. Nothing would make us happier than to be able to continue standing beside Senator Sanders in support of a party that will help make America even better. So now “we the people for Bernie”, present you, the Democratic National Convention, a choice that you may not like. Show you are willing to earn our votes with the above actions, or know for certain that the votes listed on this petition will not be yours come November.