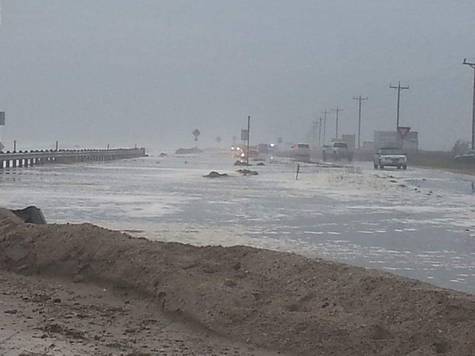 Texas Highway 87 also known as "Beach Road" to many and recently renamed "Jane Long Memorial Highway" is in imminent danger of being swept away. We are asking for immediate ACTION to protect the existing roadbed NOW along with a more permanent fix allowing for a safe travel on this roadway and reassuring the residents of the Bolivar Peninsula a permanent evacuation route to escape the dangers posed during a time of emergency exit.

The area of immediate concern is known as the "curve" and being the intersection of Hwy 124 and Hwy 87 which is frequently covered in water and debris during high tides causing the road to be closed and preventing access to travel to the Peninsula and any means of departure from the Peninsula from the Northeast side. The current conditions of the road during a storm or high tides makes visibility extremely difficult to see where the existing traveling lanes are located and making for dangerous travel. Additionally, the wave action has caused damage to the existing roadbed which has begun to buckle.

The only means of "warning" located along this roadway are the diamond shaped red flag signs which are typically blown over and laying flat on the shoulder by the high winds; therefore other means of "warnings" such as caution lights should be erected immediately.

This roadway is frequently traveled and used for many purposes. It is traveled by many living outside of the Bolivar Peninsula area. Many travel to the Peninsula for vacation, others travel to Galveston for medical needs, some for Cruise line departures and many simply for the scenic view of traveling along the coastline and most importantly the residents of the Bolivar Peninsula find themselves "trapped" when this roadway is closed being it is their "evacuation" route to leave in the event of an emergency.

We ask you to take IMMEDIATE ACTION to FIX HWY 87 permanently!!!