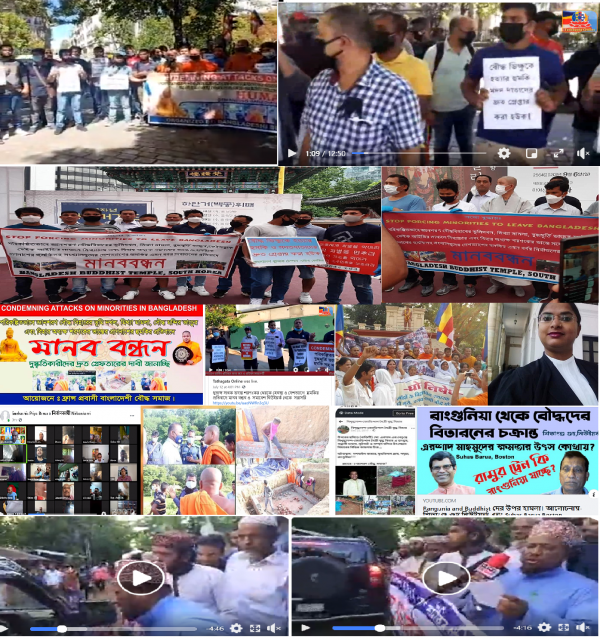 Subject: I am seeking your immediate intervention to resist those who want to hurt the spirit of the liberation war by disrupting religious harmony in Rangunia recently.

On Friday, July 10th, 2020 a group of terrorists backed by a local political party leader rushed into the Gayanasarana Buddhist Monastery which is located in Falaharia, Rangunia, in Chittagong, Bangladesh. They started vandalizing temple structures and verbally abused the Buddhist monks. They threatened to desecrate the temple and seize the land. The evidence of this mistreatment and much more is provided in the following links listed on the website. After the incident, Sharanankar Thera, head monk of Gayanasarana Buddhist Monastery, posted a video on Facebook, seeking justice from the Honorable Prime Minister. However, the local political leaders bribed the upper leadership and prevented the message to reach out to the Honorable Prime Minister. In retaliation, the terrorists, backed by the local political leader, they provoked a backlash against the monk by seemingly creating an anti-Islamic sentiment via fake Facebook id’s using his picture and propagating anti-Islamic sentiment. As a result, the venerable monk fled to a different temple far away from the cited place and since then he has been receiving death threats. The power supply to the Monastery has since been cut off, where still around fifty monks are living with fear and without electricity. This is only one of countless events that have been occurring for the last eight years with this specific terrorist group. This also affects not only Buddhist monks, but also lay minority people for which evidence is also included in the cited link (at the moment the documents are in Bengali which later will be translated into English).

A Buddhist monk who has long fought these injustices and attempted to overcome such adversities should not have to fear for his life and leave his place of worship & meditation as a result of political turmoil.

Please help avoid another Ramu incident and another series of attacks on Buddhist monasteries and Buddhist inhabitants in Bangladesh and by taking a stance in favor of the oppressed Bangladeshi Buddhist community. Please help combat religious discrimination and help to promote religious freedom in Bangladesh. Please be the voice of those who cannot be heard.

We are asking for your help and support to bring the responsible person to justice.