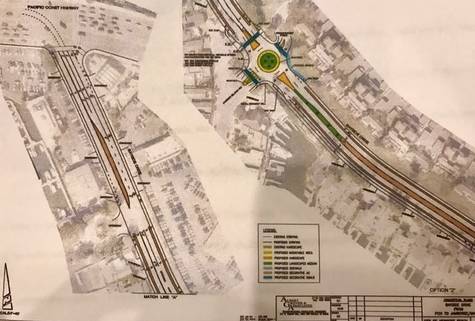 Recent traffic survey data included in a report from the City of Newport Beach Traffic Engineering department confirms that Bayside Drive, between Coast Highway and Marine Ave, is one of the most dangerous streets in Newport Beach—2 deaths, 58 vehicle related cyclist accidents, numerous collisions between vehicles and even vehicles crashing into homes on Bayside Drive has, according the Traffic Department’s report, been caused by ever increasing average speeds on this section of Bayside Drive.

Their report goes on to state that the only way to significantly reduce speeds and the unusually high rate of accidents on Bayside Drive is to reconfigure the street layout. To this point, the City of Newport Beach Traffic Engineers developed two proposals, one of which, Concept 2 (referred to as Plan 2), they indicated would be significantly better in reducing both speed and accidents. This is a quote form their report:

“Although both concepts will help to calm traffic and reduce incidents, the hybrid concept (Concept 2) will provide for a more significant reduction of vehicle speeds and accident potential. This is achieved through the addition of the roundabout, which is designed to accommodate operating speeds of 25-30 miles per hour. Additionally, the single lane and buffered bike lane area allow for a greater separation between moving motor vehicles and cyclists, pedestrians, parked vehicles, and homes, creating less opportunity for an incident and more comfort for cyclists.”

On November 22, 2016, the Newport Beach City Council heard extensive comments from residents on Bayside Drive and the surrounding neighborhoods. As a result of these comments the City Council voted 4-1 to approve Plan 2 as recommended by the Traffic Engineering Department. Now, a few activists who see the reduction of speed as an inconvenience to their ability to use Bayside Drive as an alternative to Coast Highway are creating self-serving opposition by circulating petitions to prevent Plan 2 from going forward.

In an effort to increase vehicle, bicyclist and pedestrian safety, your neighbors on Bayside Drive are requesting your support of the previously Approved Plan 2 by the City Of Newport Beach.

The Plan 2 design includes the narrowing of four lanes to two (only for a small portion of 20 homes in length) accommodate the expansion of bicycle lanes, sidewalks (which could also accommodate golf carts). In addition, at the intersection of Harbor Island Drive, a round-a-bout, which will make accessing Bayside Drive from Harbor Island Drive much easier with landscaping, a neighborhood monument, with a modern design which has been proven within newer communities to reduce speed of traffic and allow an orderly flow of traffic to merge at the intersection (versus a traffic or stop sign where cars could get backed up). This would help in the reduction accidents and severity.

Please SIGN this petition in support of the Plan 2 Street Improvement which would/could take place this year! Newport Beach is a great environment to enjoy the outdoors so our streets should be well-planned for the safety of our children, visitors and residents.

Note: The funds have already been reserved for this project and more importantly, this street is the main route for the junior lifeguards in the summer. It's common to see many young children biking to practice.