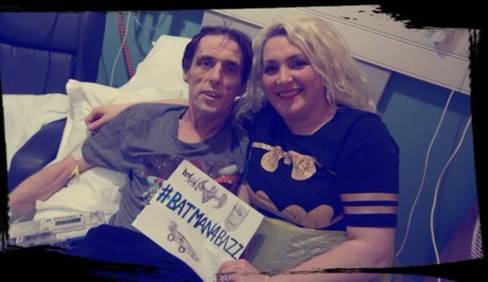 The excerpt below was taken from www.herorundown.com:

Bazz Henderson-Gates (48) was diagnosed with esophageal cancer about 2 years ago, and since then he’s had an operation to remove the tumor along with various treatments of chemotherapy and radio therapy. This was working until the cancer spread to his lymph nodes. In October 2014 Bazz was given 11 months to live and the Batman v Superman movie has kept him going all this time.

Sadly, the cancer has now spread further and he is currently in hospital battling meningitis of the brain from the cancer. His sister Gwen, ten years his junior started the #Batman4Bazz campaign in order to support her brother who’s wishing to get an early viewing of Batman V Superman: Dawn of Justice."

As a Batman fan who's been waiting forever for this release, I can really understand Bazz's anticipation and want him to have the joy of being a part in this event, even though the circumstances are not the best. This movie means a lot for him already, just as it does for all of us, so let's get this done for him!

Please, sign and spread this petition! Let's try to reach Warner Bros., DC Comics, the cast and crew of the movie in order to make Bazz's wish come true!