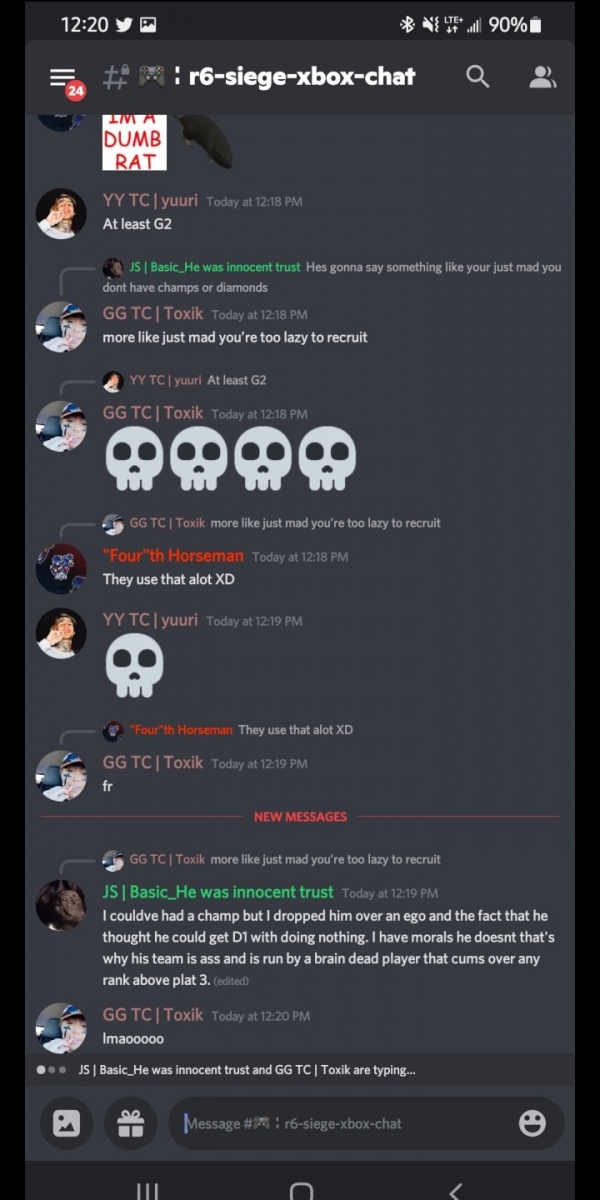 This is my petition to get unbanned from TEC. I was banned Monday, May 26th 2021.

My story with TEC

I joined TEC in the offseason between season 1 and 2. I joined to play with my friends Spillz and Penguin, at the time on the R6 xbox Johnstown Steel team. I played D1 season 2 and went on to win the championship. I became Team Captain of the team. I have been the Team Captain for several months. I have met many people and made many good friends in TEC.

The good I have done in TEC.

I have been a Team Captain and player for my team and have been praised for my captain skills. I have been a strong team member and community member of the Johnstown Steel. I have helped many players through tough times. I have also helped player outside of the team with any issues, confusion, or navigating the league. I was at one point hoping to be an AGM to help my team and others more in depth and help the league as a whole grow. On the day I was also banned I offered to help with the prospect league. I head issues with how it was managed and run and figured I could use my skills to help. I was always suggesting many things in the league to help it grow, improve, and overall make the experience better.

Some wrongs I have done.

I have been none to be toxic to other players within TEC. I sincerely apologize for this as I never mean any harm with it. I'm very competitive and take pride in what I do and that gets me in trouble. I was recently suspended for using the slur "retard" to a friend and didn't think twice about it. I realise how this could and does offend many people and I never wish for that to be the case. My ban was, to my knowledge, because I was overly toxic while on suspension. I was targeting another team and their team captain. I referred to the captain as being brain dead and other harmful terms. Once again I didt think twice about it as I consider the captain and team as friends and I took it too far. It is something I plan to work on.

Why i feel i should be unbanned

The human resources department of TEC is known by many to be "corrupt". I'm not saying what I did isnt punishable but I'm fighting for a lesser punishment. I have noticed in my time with TEC that HR members can be abusive with power. There are many inconsistencies, grey areas, and "unwritten rules". An example of abusive power is a player and cater being banned and the only way he could be unbanned is if ONE member of HRs opinion and feeling on him are changed. This same member of HR is the one that happened to ban me. I feel like me and others have fallen victim to this and I have proof. HR members also partake and promote toxic behavior. When I was banned i have not been contacted by any higher up. I have not seen any proof other then one screenshot. I was told I had warnings before this, but I looked through messages with them and I have not seen one. They refuse to get in contact with me and I was told I was not getting unbanned. The one member that banned me replies to others that question it saying I'm not talking about this. I have seen no proof of these claims on me. I have been left in the dark.

I am doing this with the hope to sway the opinion to my side. If my ban is revoked I hope to help others in the same situation as me. These players that were banned were a big part of the community and liked by many. These people havplpe a certain liking for TEC like me. The screenshot I was given on why I was banned will be either below or somewhere else here. Mind you this is the only thing I have received and it's not even from a HR me it'smber themselves.

Now I understand why I am being punished and I do plan to better myself with the language I use and my toxic behavior. I want to be an overall better member of the community within R6s and TEC if I do get unbanned and even if I dont.