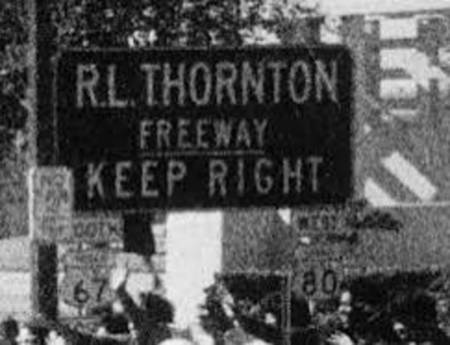 411 people have signed this petition. Add your name now!

We, the signers of this petition, humbly request that the Dallas City Council assist in every way to remove the name of ex-Dallas Mayor and Ku Klux Klan member R. L. Thornton from the freeway that now bears that name and rename the highway The Barack Obama Freeway.

When Dylan Roof shot nine black church members to death in South Carolina then-governor Hailey was faced with what could come from celebrating an ugly, devisive legacy of ignoring the horrendous history of racial relations in the South. She was swift to lead the state in removing the Confederate flag from public places. She would not tolerate government-condoned race baiting.The city of Dallas, by ignoring the legacy of the Ku Klux Klan, insults its minority citizens daily by ignoring the hateful implications of the Klan by keeping the name of a Ku Klux Klanner in a place of honor.

In 2017, the country is faced with those who want to wipe away the legacy of the nation's first African-American president. President Barack Obama came into office when the United States was on the brink of collapse. Citizens were losing their homes at a record clip. Auto makers were going bankrupt. Two ill-concieved wars were sucking trillions from the economy. Mass incarceration of black citizens was epidemic. People who could not afford health care were dying of curable ailments.

When President Obama left office home builders were having trouble keeping up with demand. Realtors complained that their for sale inventory could not keep up with demand. New and used car sales were at record levels. Boots-on-the ground soldiers in war zones were few and far between. Black citizens were being released from terribly unfair prison sentences. Thirty one million citizens who needed health care had health care. President Barack Obama was a God-send for an ailing country.

President Obama appointed the first Latina to the Supreme Court. He appointed the first black Attorney General of the United States. He appointed a TEXAS Latino, Julian Castro, as his Housing and Urban Development Secretary. His cabinet looked like America. (Trump's cabinet is the whitest since Ronald Reagan.)Barack Obama befriended blacks, whites, Latinos, Christians, Asains, Jews, Muslims, Hindus, non-believers, the LGBTQ community, the disabled, the poor and the rich...EVERYBODY! Mr. Obama represented ALL OF US!

He respected Mexico and Mexicans. He wanted our Mexican brothers and sisters to be placed on a path to citizenship, NOT build a WALL between our countries. A wall between mother and children, grandmother and grandchildren. He did not refer to Mexicans as rapist and criminals.

Now we have a regime that wants to wipe away that wonderful legacy and replace it with hate. They vow to kill Obamacare. This regime insults our allies Japan, France, Australia, England, Canada, Mexico, Germany. The Trump regime insults Muslims, non-belivers, Israel and more. They are giving big banks (once again) the right to defraud U. S. citizens. Trump has appointed an Attorney General who was deemed too racist in 1986 by a REPUBLICAN house and senate. Trump's closest advisors are white nationalists. These are the people who have vowed to wipe out President Obama's legacy. WE WILL NOT ALLOW THAT TO HAPPEN!

Donald Trump took two days and was forced to repudiate the murderous actions in Charlottesville. We can not allow a man who cavorts with the Alt-right, neo-Nazis, and the Ku Klux Klan to destroy the legacy of President Obama.

Every person of Jewish descent in this country should follow the lead of the Alex Sanger (Sanger-Harris Department Stores) and Herbert Marcus (Neiman Marcus). In the early twentieth century these Jewish merchants risked their successful businesses to stand up to the nation's largest Klan chapter, which was right here in Dallas. The Klan wanted to exterminate Jews.

Dallas Morning News president, George Bannerman Dealey, (Dealey Plaza) almost took the newspaper in to bankruptcy due to his many editorials repudiating the Klan.

The signers of this petition pledge to work to see Mr. Obama's name on roadways all over the United States and other countries throughout the world.

Note: This project involves a federal, state, and local roadway. Changing the name WILL NOT happen overnight. Please remain aware of all steps being taken on this project. Getting the Dallas City Council's backing is the first, and MOST important step in achieving this goal.

SEND THIS PETITION OUT ON ALL OF YOUR SOCIAL MEDIA.

Remember: educate others. Not everyone knows ex-Dallas mayor R. L. Thornton was THE leader of KKK in Dallas. Then become active in both spreading word and getting at least five other people to sign this petition EVERYDAY. Do not just do nothing. Doing nothing got us TRUMP!