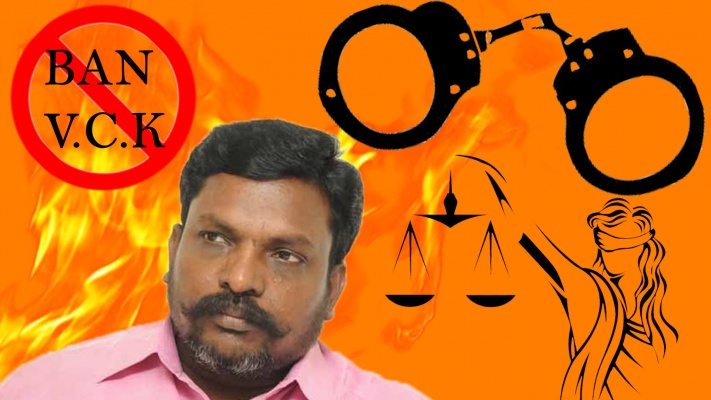 Join us in this Online Petition signing campaign against communal Thirumavalavan.

Indu Makkal Katchi , Thamizhagam demands for the immediate ban of communal party 'Viduthalai Siruthaigal Katchi' based in Tamil Nadu with reference to the continuous hate speech carried out by it's leader and Member of Parliament Thol.Thirumavalavan.

Thol.Thirumavalavan has recently mentioned when speaking to an Youtube channel named Periyar TV, that "Hindu/Sanathana Dharma describes every Hindu women are Prostitutes". Firstly, this itself is a disgusting hate speech against women on the whole and secondly it is also against the belief of every Hindu living in this world.

Even though Thirumavalavan tries to give explanation and proofs from the texts of Manusmrithi , it is clearly baseless and are based on an illiterate and useless work of the man named K.Veeramani who is already involved in many such incidences against Hindu/Sanathan Dharma.

Contrastingly when talking about Hindu/Sanathan Dharma, it actually portrays the Women goddesses as the Shakthi(Energy) that rules the world.

We , Indu Makkal Katchi , Thamizhagam strongly comdemn all such activities and want the government to set an example by not tollerating to people like Thirumavalavan.

Attched below is the copy of a letter sent to the Honorable. President of India, for your reference.

Sign the petition and stand with us so that no one ever dares to do the same mistake again.