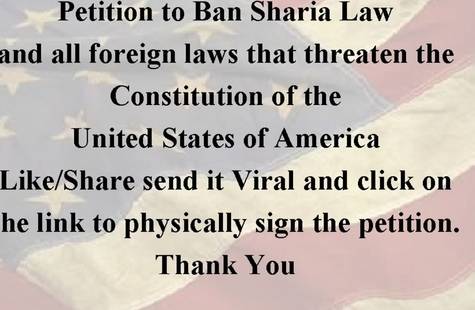 This petition is to urge President Donald J. Trump to "Ban Sharia Law" from the United States of America. Sharia Law has no place in the United States and for those Muslims that wish to live here they either need of understand, respect, and obey the laws of the United States of America. The U.S. Constitution is the law of our land and the citizens of United States. There is no need and there is no place in America for any foreign laws to be practiced here in our great country. This includes but not limited to: Sharia Law, NATO, WHO, WMF or any other organization of the Global Community: Since it is known to the American population that a law such as this would not be passed by Congress or Senate in Washington D.C. it is our request that you Mr. President Donald J. Trump draft an Executive Order banning all foreign laws that may attempt to take foothold in the United Sates of America effective immediately. What use to be know as the District of Columbia is now the District of Criminals and the swamp needs to be drained now