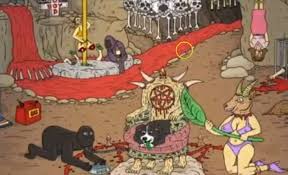 Ban Mr. Pickles as well as other cartoons with satanic/luciferian messages or any ritualistic murder depictions.

I am starting this petition to attempt to havea show removed from cartoon network more specifically from adult swim which adult swim airs on the cartoon network each night from8:00 pm to 6:00 am. This show that started this petition is calledMr. Pickles whichairs at 11:30 pmsundays. It has nothing almost but satanic ritualistic violence all the things as well I typed in the below. It isn't just because I am a follower of the LORD YAHUSHUA(JESUS CHRIST)but it's also because I not only feel it's indoctrinating people more particularly young children/adults into Satanism without permission through satanic/luciferian imagery/satanic subliminal messages but adult swim on it's typed text message screen that came up literally seconds before the show said as follows: Since 1425 one secret organization has sought dominion over the world of man(then flashes the wordin all caps "ILLUMINATI" across the screen really fast and only slowing the playback down can someone even notice or read it) ...tonight it reaches a new level of indoctrination (screen flashes in all capitals the words "HAIL BAPHOMET") withan animated show about a dog. Give your soul to Mr. Pickles (Baphomet symbol flashes quick in the middle of the screen then the satanic upside down pentagram flashes really quick onto the screen as well...this two symbol cycle repeats three times all together.) This justtold people to give their soul to satan through the name mr. pickles and preached luciferian/satanic/illuminati/occult doctrine to millions of americans and nobody is protesting thisreally. Seeing as how someonecan't preach the gospel of YAHUSHUA(JESUS CHRIST) in public hardly anymore yet millions of people are able to be force fed Satanism through a cartoon is ridiculous. I am calling upon whoever may see thisits not just some Christian message but a message of truth because yes we have freedom of religion and we know thatnobody is allowed to force any belief upon any of us...thus free will that isour humanright. Also I know their are parents and family of people watching adult swim or even mr pickles that now know the truth and wouldn't like to seethis type of sick abuse andfilth aired on televisionon cartoon network/adult swim. I would like to also seeshows that children, teens, or adultscould watch removed. Onesthat have satanic/luciferian violence, forcing satanic/luciferian/illuminati beliefs upon children plus adults, or other vile acts associated and put in a satanic/luciferian setting such as: rape, murder, dismemberment, corpses posed in blasphemous/satanic positions, pentagrams, cannibalism, self mutilation, decapitation, mocking ofGOD, mocking JESUS, mocking the bible, mocking the cross,violent beatings, sex, sacrifices made to the devil/lucifer/baphomet/or any demonic entity/e.t.cwhether human or animal, subliminal/hidden messages containing any of the above acts or referring to such acts.