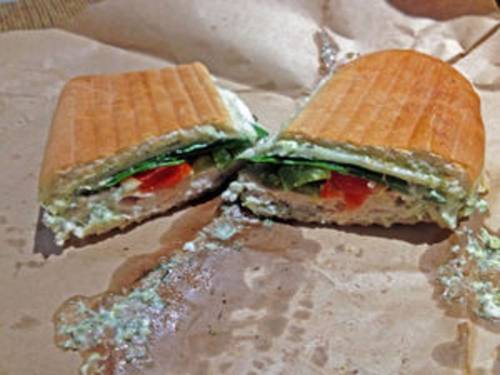 Currently at Keene State College, if you live on campus, you MUST have a meal plan. It is a mandatory requirement, one which students cannot get out of without being "released from their Housing Contract."

To make matters worse, the college currently gets their food from Sodexo, which has seen it's fair share of recent controversy. From losing a contract with the marine corps shortly after recalling "nearly 3,000 pounds of chicken for possible contamination with the potentially deadly Listeria bacteria", to withdrawing ground beef in Britain after finding "horse DNA" in one of it's samples, to reports of improper health standards (uncooked food, insects in food, food poisoning).

One recognizable complaint that I've heard is inconsistency. The food will be mediocre for a period of time, but then during a special event (parent's weekend, or when an important business suit wearing person arrives) the food suddenly spikes in quality. The speed of going from fast food to casual dining and back again could make your head spin.

I wouldn't complain if I had these problems in a restaurant. I've dealt with complications before, with the simple response being to stop going.

At KSC however, you can't do that. You are forced to suck it up and pay for a service that besides not being involved with your education, often doesn't meet the standards that most would like. With the only explanation I've received from Res Life being that "If a student does not live on campus, or lives in one of the on campus residential apartments (i.e. Pondside 2 or Bushnell) where full kitchens are provided, the meal plan requirement is not in effect."

I'm not satisfied with this. Many of the buildings, notably Pondside 3, have a full kitchen in their lobby, complete with oven, stove, sink, and microwave, to which my friends and I have cooked in a multitude of times. It is more than enough to cook meals in, and if it is not satisfactory to the standards of Res Life, they should not have paid the money to install it.

I've also received an email from the school which has said that "the meal plan requirement is in place to ensure that all traditionally-housed (non-apartment) students have access to a variety of safely prepared, nutritional foods to support their health, growth and learning while on campus." I would be fine with this statement if it were both completely true and for an optional plan, but with the many complaints against quality and the need for specialized diets from the students, not giving an option to opt out only increases mental and physical strain.

A school's job is to educate its students, not force them to buy products. We come here for the sake of learning, not marketing.

If you are currently a student at Keene State College, please sign this petition so we can show KSC that we as students and adults have a right to eat the way we wish, and not be force fed contracts and red tape.