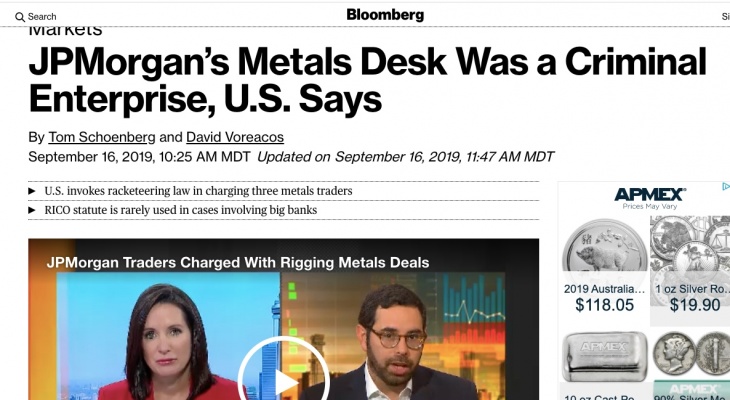 In the past decade, thousands of Americans and investors around the globe attempted to protect themselves from rampant government spending and central bank money printing by buying gold and silver.

Yet they lost on their investment.

An institution that not only has an extensive track record of financial felonies (that it’s been fined over $30 billion for in recent years), but that was actually even labelled as a “criminal enterprise” by the Department of Justice.

An agency that has already received guilty pleas from several former J.P. Morgan traders, like John Edmonds, who “admitted that he learned this deceptive trading strategy from more senior traders at the bank, and he personally deployed this strategy hundreds of times with the knowledge and consent of his immediate supervisors.”

In other words, this wasn’t just a one time thing by some low-level rogue employee.

Of course it’s possible to go on for hundreds of pages documenting the violations of the law committed by J.P. Morgan (which interestingly enough Helen Chaitman actually did quite eloquently in her book JPMadoff, which documented the unusual arrangement in how J.P. Morgan was the sole banker for Ponzi scheme financier Bernie Madoff).

Although how much more is really needed to say it’s at least reasonable that J.P. Morgan bank should no longer be able to trade in the gold and silver markets?

The bank has a legal track record that would land any individual retail investor in jail, and if you think it’s reasonable that they should at least be banned from trading in the gold and silver markets, I encourage your support of this petition.

A petition that has been created on behalf of the thousands of gold and silver investors who have been victims of J.P. Morgan’s fraudulent market activity.

The Evidence of the Crime

Of course for those who are newer to this story, streams of evidence, showing not only the frequency, but the degree of manipulation, are readily available.

Such as in this interview, where former CFTC commissioner Bart Chilton, who presided over the CFTC’s investigation into silver manipulation almost a decade ago, confirmed that J.P. Morgan inherited Bear Stearns’ silver position, that the combined position was over the allowed position limits, and that despite being given a temporary waiver to reduce it, they actually made it larger! At the exact same time that silver dropped from $21 to $9 in 2008!

Keep in mind that this was all amidst historic central bank easing, the failure of Bear Stearns and Lehman Brothers, and while physical silver dealers around the globe reported shortages, to the extent that some thought they were going to go out of business because they simply couldn’t source any product.

Does that seem normal for there to be a shortage of an asset after the price has fallen over 50%, at the exact time that the reasons people buy it were more pronounced than ever?

So while most in the financial markets look at silver's move in 2008 and explain it as panic selling, the evidence shows that simply wasn't the case.

One can only wonder how much money investors lost because of that.

Or how much money is being lost each day even now, as amazingly the exact crime (“spoofing”) that many traders have already pled guilty to, continues on even now on a somewhat regular basis!

So why is J.P. Morgan still allowed to trade in the gold and silver markets?

For anyone who has not yet seen former commissioner Chilton’s direct testimony, and wants to see evidence rather than opinion, here’s the shocking interview he gave in March of 2019. Where he talked in detail about some of the clear manipulations of the silver market that J.P. Morgan was involved in.

For an even more detailed and thorough explanation of the history of J.P. Morgan’s involvement in the silver market, what’s lead the situation to this point, and how it’s all going to unfold, The Big Silver Short is an investigation of the case that includes interviews with 15 of the world’s top silver experts and witnesses, who all confirm the same facts and evidence.

While enough evidence of criminal behavior exists to make a case that J.P. Morgan could be completely barred from the securities industry and prosecuted, this petition is designed so that if you feel that at least banning J.P. Morgan from trading gold and silver is reasonable, that you can have a way to express and support that view.

If so, please do sign and share this petition to encourage the initiative to ban J.P. Morgan from the gold and silver markets.