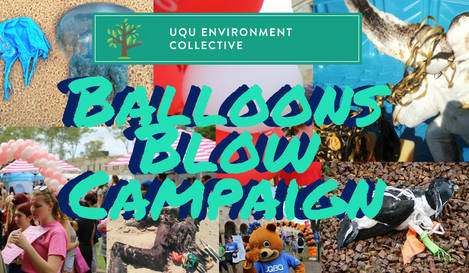 ***Sign this petition to request a ban on helium-filled balloons used at UQ Union Clubs & Society Events (eg. Market Day). ***
As you may already know, helium balloons contribute to a large amount of waste that floats in the oceans and washes up on beaches. These bursted balloons resemble food and ultimately end up in blocking the digestive systems of sea turtles and strangling sea birds and other marine life. 2-3 years ago, a UQ Union balloon was found on a beach within Moreton Bay, and the person who found it managed to track it all the way back to UQ Union marketing but nothing was ever done about it. . . it's not a great look for a University known for it's science programs and marine conservation efforts, and it could have been much worse if it had been found wrapped around the neck of a migratory sea bird or an endangered loggerhead sea turtle.
Helium is also a finite resource, which is used in ventilators for premature babies, LCD Televisions, MRI machines, lazers, fibreoptics, welding and space/sea exploration. . . Advertising a brand or club is not a responsible use of such a valuable and depleting resource.

By signing this petition, you and staff members of UQ Sustainability and the Centre of Marine Science will be providing crucial support towards banning the use of Helium-filled balloons on Campus.