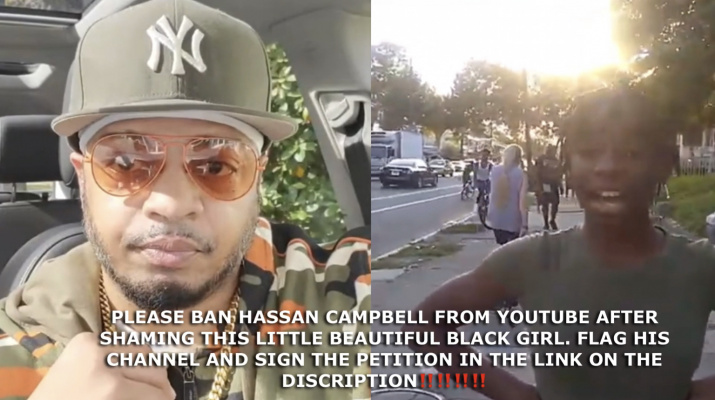 I call for everyone on YouTube to ban Hassan Campbell by simply flagging all of his videos and FLAGGING the part where he PUBLICLY shamed Derrick C Williams’s DAUGHTER of her HAIR. He is a COLORIST, RACIST, and PROUD WOMAN BEATER. If you are NOT banning Hassan Campbell you are NOT protecting women ESPECIALLY YOUNG LITTLE BLACK GIRLS!
Damaris is a HARMLESS little black girl that had nothing to do with her fathers feud and Hassan Campbell. Hassan has also being molested by Africa Bambatta to tear Bambatta’s name down for YouTube views and has publicly admitted and threatened to rape and molest children.

We must have Chad Hurley to ban his channel. There is YOUTUBERS who haven’t done anything as bad as Hassan did and got their channels permanently deleted. THE DOUBLE STANDARDS HAVE TO STOP!