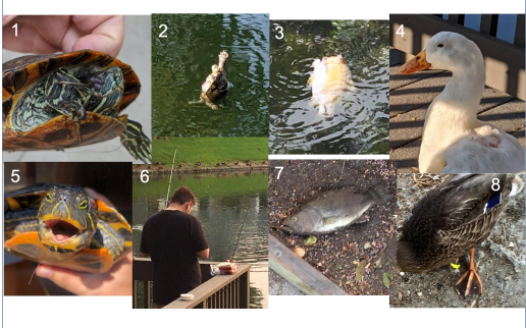 While there is a history of fishing at The Village, it has become abundantly clear that this privilege is being abused and fishing should not be allowed at the ponds. A moratorium was placed on fishing for over a year while the ponds were repaired, allowing turtles, ducks, and koi to not fear a human presence at the edge of the pond. Residents could enjoy peaceful strolls as wildlife fearlessly swam alongside walkers.

Fishing was reinstated beginning September 1, 2020, since which time numerous cases of wildlife abuse have been recorded by concerned residents. Residents have provided the attached pictures, showing turtles being hooked, the lines cut, and thrown back to die. Fish being removed from the ponds and thrown on the ground or damaged to the point of death before release. Ducks being harmed to the point of needing veterinary care or hooked with fishing lures and left to fend for themselves. It is critical that fishing at The Village San Juan be stopped immediately to prevent further abuse of wildlife and preserve the lives of the turtles, ducks, and fish that call the ponds at The Village home.

All of these pictures were taken between September 1st and September 27th – less than one full month since fishing has been reinstated at The Village. More concerning is the fact that these incidents are likely not a comprehensive list of violations of HOA policy and abuse of wildlife.

Please add your signature to support the ban of fishing at The Village San Juan and let our HOA know that the residents of The Village don’t support the needless abuse of wildlife that share our home.