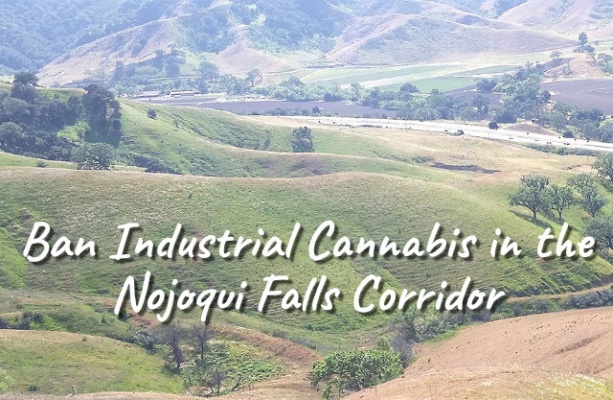 All of the food growing, grape growing, agritourism and agroecology projects of Santa Barbara County's unique and strikingly beautiful Nojoqui Falls Corridor are under threat from as many as eight (8) industrial cannabis sites under review by the planning commission.

Why Do We Want To Ban Industrial Cannabis In the Nojoqui Falls Corridor?

BECAUSE THERE ISN'T ENOUGH WATER!

The climate is changing, California is in a drought, and cannabis is a relatively thirsty crop. Less rain means diminished aquifer throughout the whole water basin. When the water is diminished or gone, it is diminished or gone for everything in the Nojoqui Falls Corridor. Approving cannabis sites one by one in this tiny water basin is death by a thousand cuts. We do not have consistently sufficient rainfall or a large enough water basin to support cannabis and continue to support the existing oak savannah ecosystems, farms, ranches and residents already growing grapes, berries, veggies and other foods in our diverse and fertile corridor. [Click to learn much more about water in the Nojoqui Falls Corridor]

MORE REASONS TO BAN CANNABIS IN THE CORRIDOR

SUMMARY
It is unreasonable to expect industrial cannabis operations to happily co-exist in the same vicinity with agroecology, agritourism or traditional small farm operations. Neither the watershed nor the prominent wind eddies will support it. Visitors will stop visiting. The gateway to and from the Gaviota Coast and the Santa Ynez Valley, including Buellton, Solvang and the Santa Barbara Wine Country becomes an industrial zone to the senses. There are plenty of other areas in the county that are not as visible, heavily trafficked or water-fragile.