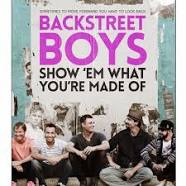 Backstreet boys to receive a recognition to music award.

backstreet boys are the biggest selling boy band of all time, and we feel that it is time they got some recognition for the hard work, successful albums, blood sweat and tears poured in to the success they have achieved as a group.
For many fans, their music is a therapy, its help in times of crisis and need in our many lives. many of us have grown up alongside the group, and have seen how they have grown and developed from boys to men and in addition, there music.

The Backstreet Boys (sometimes referred to as BSB) are an American boyband formed in orlando in 1993.

After a two-year hiatus, they regrouped and released a comeback album never gone (2005). Richardson left the group, after the conclusion of the never gone tour, in 2006 to pursue other interests. The group then released two albums as a quartet: unbreakable (2007) and this is us(2009).

In 2012, the group announced that Richardson had rejoined them permanently. In the following year they celebrated their 20th anniversary and released their first independent album, in a world like this (2013). The group also released their first documentary movie, titled ' show em what your made of 'in January 2015

The Backstreet Boys have sold over 130 million records worldwide,making them the best selling boyband in history. They also received a star on the hollywood walk of fame on April 22, 2013

in our opinion, a group such as this deserves recognition. There music speaks to many people, fans all over the world have their own stories to tell on how the group has touched there lives in so many ways, the music given sanctuary and healing to many, speaking volumes in everyday life scenarios. i for one, never wake up without listening to there music, or if i have a hospital appointment or something difficult, they are my first port of call.

so to Brian litterel, AJ Mclean, Nick carter, Howie dorough and Kevin Richardson, from us your fans, we salute you and thank you for many fabulous years of music.