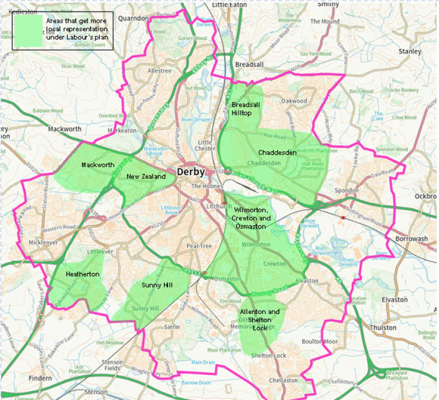 Back Local Representation for Local Communities In Derby

Labour today is unveiling its recommendation for eight areas across Derby to get a new, local community voice, and launching its campaign for the Boundary Commission to create new wards that represent the communities we live in, not the unrepresentative status quo.

Under Labour’s plan, everyone gets a greater voice, and by having smaller wards, these areas would see even better local representation:

What is Labour's Plan?

· Increased recognition and influence of communities across our city

· Gets decisions closer to the people the Council represents

· Two councillor wards are easier to balance by population, preventing one area of the city having a greater say than another

· Two councillor wards are more reflective and proportional to how people vote, rather than guaranteeing some parties “safe seats”

· Two councillor wards are likely to be geographically smaller, creating better community cohesion and reducing the distance ward officers and councillors have to cover.

The Conservatives are more interested in stitching up an electoral map that works for their self interest and the ease of election administration, rather than working with Labour to produce a map that gives more communities an identity, voice, and control of their own area.

· Smaller wards in terms of both population and geography, increasing the effectiveness of local councillors and officers

How does this impact my area?

These are the eight areas that Labour’s plan would give a voice. Each area would be represented by Councillors elected by the local community, and be given direct support from Council Officers, their own funding and dedicated neighbourhood support.

The exact lines will be decided by the impartial Boundary Commission, but Labour will be campaigning for residents of these eight areas to have their voice heard by having their own ward.

Heatherton is currently overlooked by Littleover Ward. Labour’s plan would create a new Heatherton Ward, giving it the opportunity to elect its own councillors, and decide what to do with its own funding.

Mackworth Ward would become more cohesive, with it returning to west of the A38. This means that the community would be better served by councillors focussed entirely on the Estate, and not the city centre.

By splitting off New Zealand, this area would have two councillors that are dedicated to serving the needs of the families, students and residents of this area. Direct funding and support would follow.

Sunny Hill is currently overshadowed by Blagreaves Ward. Labour’s plan sees Sunny Hill reunited with the Austin Estate and its community centre in one ward, and two dedicated councillors for this area.

Breadsall Hilltop would regain its ward status, and gain recognition and two councillors on the Council. This creates the opportunity for them to have their own identity and a name more reflective of the area than Derwent.

Chaddesden would be two wards: East and West. This gives Chaddesden another councillor, and unites the actual area of Chad in one ward, with the estates forming Chad East. This re-unites communities split by the current lines.

Currently in a mammoth ward stretching from the City centre to the Alvaston suburbs, Labour’s plan sees this community gain direct representation and a new identity.

Allenton Ward is recreated under Labour’s plan, reemphasising this important neighbourhood. Residents would get better representation for local issues by having two dedicated councillors.

The remaining areas of the city would also be well served by this new plan. They would see their councillors focus on more cohesive neighbourhoods, tackling local issues.

Littleover and Blagreaves would be reunited, ending the current situation where people think they live in Littleover but actually are in Blagreaves ward.

Arboretum becomes a smaller ward that is less dominated by the city centre and the developments that are taking place there.

Normanton is united, taking on all of the suburb and uniting the community that is currently split by boundary lines.

Darley retains its current shape, and gains part of the city centre, uniting the Cathedral Quarter with the residents that live, work and socialise nearby.

Abbey focusses more on Abbey Street and the surrounding area, reducing the geographic spread of the ward.

Oakwood is given the two councillors that its population warrants, and boundaries that reflect the actual suburb of Oakwood.

Derwent ward ceases to exist, ending an unknown bureaucratical term for an area where most people think they live in Chaddesden. Chaddesden East and West boost Chaddesden’s recognition across the city.

Alvaston and Boulton villages are united, creating a better community connection between these two areas.

Sinfin becomes Sinfin only, with Osmaston moving towards the north where it has more natural links with other areas.

Agree with Labour’s Plan? Tell the Boundary Commission what you think by 29th March

Derby Labour is keen to hear from everyone in Derby for ideas of where the boundaries should be exactly, new names for the wards created and your thoughts on what this means for where you live.