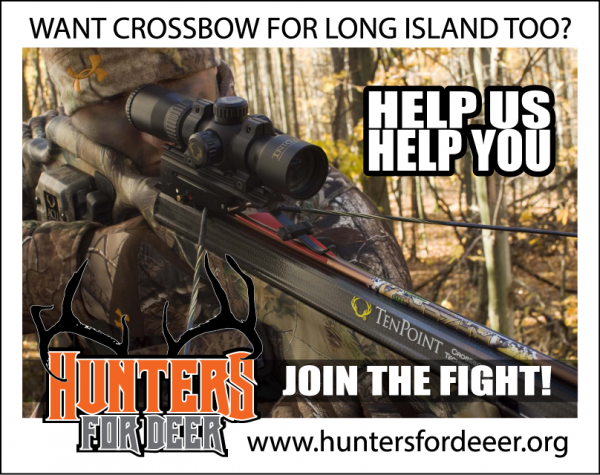 Where as, Governor Cuomo signed the annual budget bill for 2014-15, which includes language authorizing the use of crossbows for hunting under certain circumstances. The NYSDEC is tasked with creating a draft of the regulations in the near future, and will implement the new law in time for this fall’s hunting seasons. NYSDEC will include all crossbow updates in the 2014-2015 Guide to Hunting and Trapping Laws & Regulations, available when licenses go on sale in August 2014.

While, WMU 1C Suffolk County and WMU 3SWestchester County, have been excluded from this bill, Suffolk Countyspecifically,has been the focus of a federal deer culling effort, carried out by the USDA and sponsored by the Long Island Farm Bureau. NYS taxpayer funds supported this extermination of our resource through grant money secured by the LIFB in upwards of $200,000.
Although the NYSDEC and localpoliticians supported the culling of the white-tailed deer population in WMU 1C, the efficacy as a multi-pronged effort to reduce deer numbers on state, town and county properties proved to be expensive and a complete failure. Indeed, the cull wasultimately performed only on private properties, mainly farms, the justification was placed on public health and safety concerns due to the east end of Long Island having 3x the carrying capacity of deer in the general area.
We, the undersigned, residents and taxpayers of New York Statebelieve that if there exists to be an epidemic or an overpopulation of deer in WMU 1C, as expressed by the recent actions and issuance of DDP's by the NYSDEC to the USDA, to kill deer outside of the legal hunting seasons in WMU 1C, rather than excluding crossbows from Suffolk County, it would best interest the constituents of Suffolk County and NYS to authorize the use of crossbows in Suffolk County WMU 1C, to aide in the success of Suffolk County hunters.
We respectfully request that WMU 1C, be included in the passage of newly created regulations allowing crossbows to be used as a legal hunting implement during our Regular Bowhunting and Special Firearms season, effective for the 2014-2015 Hunting Season.