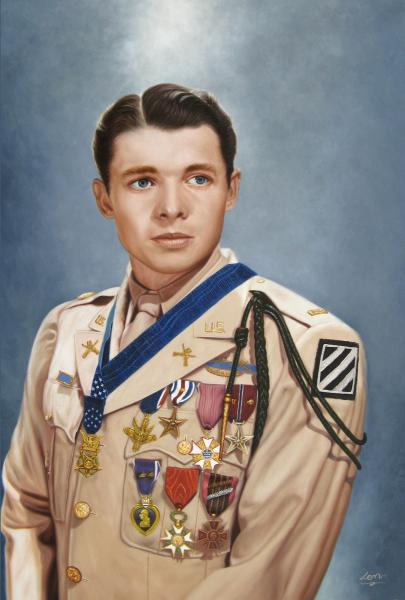 Audie Leon Murphy is an American Legend, an iconic figure in American history, and a hero for all times. Audie Murphy came from humble roots to become our Nation's 'most decorated' combat soldier of World War II, amassing an unprecedented 33 decorations, medals, and citations, many of which were awarded multiple times. He was further honored by the Governments of France and Belgium as well.

Audie Murphy enlisted in the Army at the age of 17 after having been turned down by the Navy, Marines, and Army Air Corps. He spent 30 months in combat in World War Two and earned the Medal of Honor for his single-handed defeat in Eastern France of an estimated 250 enemy soldiers and six Jagdpanther tanks. For over one hour he remained alone atop a burning tank destroyer calling artillery adjustments and manning a .50 caliber machine gun while defending his unit against the onslaught of enemy dismounted infantry and armor. He was personally responsible for protecting his sector and certainly saving his unit from destruction.

During the course of the war Audie Murphy, with little formal education rose from the enlisted rank of Private to the rank of First Lieutenant. He continued his military career postwar as a member of the Texas National Guard and Army Reserve and retired with the rank of Major.

Following the war, Audie Murphy became a best-selling author with his highly acclaimed memoirs, "To Hell and Back". His memoirs are still in publication today and can be found at any major bookstore. He later became a very successful motion picture actor, and portrayed himself in the autobiographical film "To Hell and Back" which became the highest grossing film in the history of Universal Studios until it was finally knocked off the charts by "Jaws" some 20 years later. In all Audie Murphy starred in or produced a total of 44 feature films, penned patriotic poetry, and became a successful country music songwriter.

He assisted the U.S. Army in the production of a documentary in 1955 for "The Big Picture" a popular U.S. Army series titled "The Third Division in Korea" and later assisted the United States government for a second time in the 1960 documentary"Broken Bridge" that highlighted the dangers of the nuclear age and the Soviet missile threat at the height of the Cold War. For this service to our Nation he was awarded the U.S. Army Outstanding Civilian Service Medal.

Above all Audie Murphy was the sterling example of an American patriot. He narrated several Public Service Announcements for the U.S. Army Recruiting Command, as well as having been the first veteran to speak openly and honestly about the effects of post-traumatic-stress-disorder (PTSD) with which he suffered his entire adult life.

The personal story of Audie Murphy's triumph over adversity and poverty serves as an inspiration to millions of Americans and he continues to be a role model and inspiration for multitudes of American military personnel; past and present.

Audie Murphy has previously been awarded many honors. He has been cited in the "Congressional Record" on numerous occasions. He has had schools, monuments, roads, a VA Hospital, and numerous buildings on military bases named in his honor, and the Army today has the "Sergeant Audie Murphy Club" to honor its most distinguished enlisted soldiers. Audie Murphy has further received a "Star" on the Hollywood Walk of Fame, and was inducted into the National Cowboy Hall of Fame.

Perhaps his single greatest honor is having been laid to rest after his untimely death in a plane crash at age 46 at Arlington National Cemetery. His widow, Mrs. Audie L. Murphy passed away April 8, 2010 at age 87. His sons, Terry and James survive him, as does his sister Nadine.

His amazing achievements in life, his patriotism, his dedication to his fellow man, and the protection of America and America's freedom exemplify the finest qualities and virtues of American citizenship and are worthy of the presentation of the United States Presidential Medal of Freedom.

We, the undersigned, respectfully request that the United States Presidential Medal of Freedom be posthumously conferred upon Major Audie Leon Murphy.

Sec of the Army John Marsh

Sec of the Army Thomas White

The Legislature, State of Texas