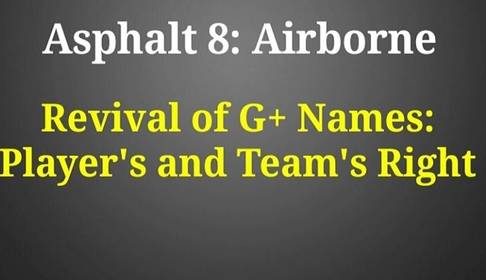 Asphalt 8: Airborne by Gameloft, is one of the most popular racing games today. Teams/ Clans play a huge role in this game. People play this game under a team/ clan name for mutual skill improvement. Hence team names have a huge significance.

Since the update 3.0.0i of Asphalt 8, developers have a disabled the display of Google Plus name in-game which was available since its release. Android players use G+ names to represent their teams in effective way. So with this petition, we urge Gameloft to:

Let the android users use their G+ names in game freely.

iOS users are allowed to change their names on Game Center, we should also get the equality. Many players logged in to FB by mistake or just to check Friend's LB in MP seasons and they lost their team names. If done, it'll be highly appreciated.