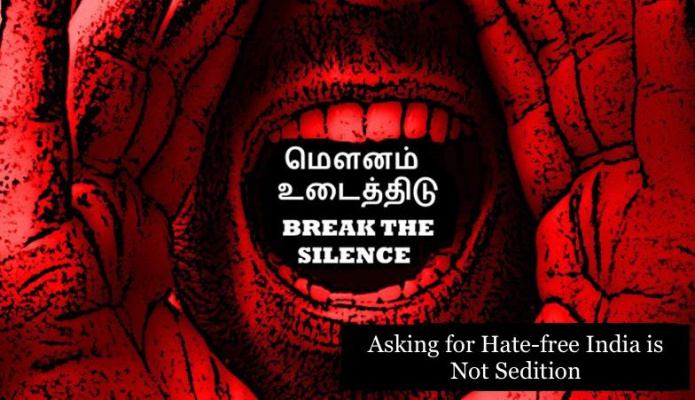 Asking for Hate-free India is Not Sedition

715 people have signed this petition. Add your name now!

On July 24, 2019, 49 prominent Indians wrote to the Prime Minister condemning mob violence and lynching. In October, acting on a private complaint, a Chief Judicial Magistrate in Muzzafarpur, Bihar, directed the police to register a case of sedition against the signatories to the letter. The complaint and the direction of the CJM are in violation of the letter and spirit of the Constitution. Below is the text of the original letter signed by the 49 persons now charged with sedition. We wish to add our endorsement and bring the letter to your notice once again. We hope you agree and will declare that asking for a hate-free India is not sedition.

The original letter, which we endorse as citizens of India is as below:

We, as peace-loving and proud Indians, are deeply concerned about a number of tragic events that have been happening in recent times in our beloved country.

Our Constitution declares India as a secular, socialist democratic republic where citizens of all religions, ethnicities, gender and castes are equal. Hence, to ensure that every citizen enjoys the rights given to her/him by the constitution, our submission is:

1. The lynching of Muslims, Dalits and other minorities must be stopped immediately. We were shocked to learn from the NCRB (National Crime Records Bureau) reports that there had been no less than 840 instances of atrocities against Dalits in the year 2016, and a definite decline in the percentage of convictions.

Further, 254 religious identity-based hate crimes were reported between January 1, 2009 and October 29, 2018 where at least 91 persons were killed and 579 were injured. (FactChecker.in database October 30, 2018). The Citizens’ Religious Hate-Crime Watch recorded that muslims (14% of India’s population) were the victims in 62% of the cases, and christians (2% of the population) in 14% of cases. About 90% of these attacks were reported after May 2014, when your government assumed power nationally.

You have criticised such lynchings in parliament Mr. Prime Minister, but that is not enough! What action has actually been taken against the perpetrators? We strongly feel that such offences should be declared non-bailable and that exemplary punishment should be meted strictly and surely. If life imprisonment without parole can be the sentence in cases of murder, why not for lynchings, which are even more heinous?

No citizen should have to live in fear in his/her own country!

Regrettably “Jai Shri Ram” has become a provocative ‘war-cry.’ Today, that leads to law and order problems and many lynchings take place in its name. It is shocking that so much violence should be perpetrated in the name of religion. These are not the Middle Ages! The name of Ram is sacred to many in the majority community of India. As the highest Executive of this country, you must put a stop to the name of Ram being defiled in this manner.

2) There is no democracy without dissent. People should not be branded ‘anti-national’ or ‘urban Naxal’ and incarcerated because of dissent against the government. Article 19 of the Constitution of India protects freedom of speech and expression, of which dissent is an integral part.

Criticising the ruling party does not imply criticising the nation. No ruling party is synonymous with the country where it is in power. It is only one of the political parties of that country. Hence, anti-government stands cannot be equated with anti-national sentiment. An open environment where dissent is not crushed, only makes for a stronger nation.

We hope our suggestions will be taken in the spirit that they are meant – as Indians genuinely concerned with, and anxious about, the fate of our nation.