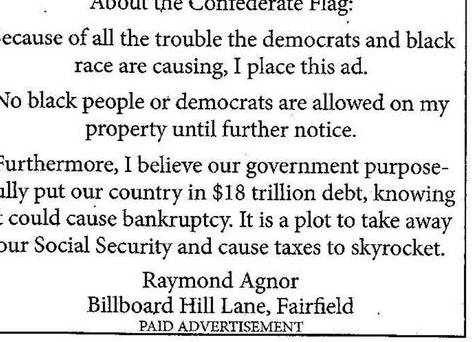 Ask The News-Gazette to apologize for printing a racist ad!

We, the undersigned, call upon The News-Gazette to publicly apologize for printing the ad placed by Raymond Agnor and run on July 15, page 5, section A. Referring to the recent removals of the battle flag from public spaces, the ad cites "all of the trouble" caused by "the democrats and the black race" and states that "no black people or democrats" are allowed on Mr. Agnor's property. Such rhetoric is overtly racist, polarizing, and hateful. We are baffled as to why The News-Gazette would take money to run such a bigoted and vitriolic ad, especially given the fact that we live in an area with such a long and dark history of violence against African Americans. Publishing this ad promotes an image of Lexington and the surrounding community as racist, divisive, and unwelcoming. Local universities have struggled to attract and retain students, faculty, and staff of color, no doubt the product of such an environment. While Mr. Agnor is of course entitled to his own opinions, distasteful as they may be, publication of this ad implicitly condones his sentiments. Worse, it further impairs the building and maintenance of an inclusive, diverse community. One can only imagine how unwelcome and unsafe a potential student or new family of color might feel upon seeing such an ad prominently displayed in our local paper. This is not the community we ought to strive to be.

Thus, we call upon The News-Gazette not only to apologize for running the ad placed by Mr. Agnor, but to condemn the sentiments therein. Failure to do so risks not only potential boycotting of the paper, but more importantly, damage to the reputation, well-being, and inclusivity of our community.