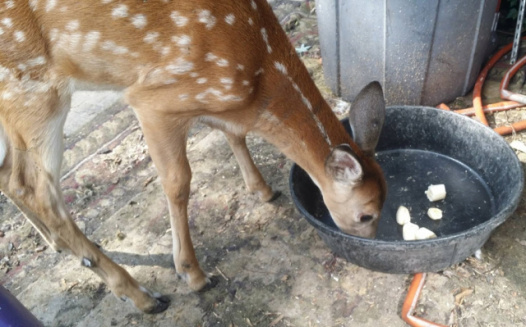 Iowa Wildlife Rehabbers recently received a letter from the state restricting the certification of people involved with rehab and putting a blanket ban on the rescue of all white-tailed deer in the state. Coming on the heels of reversals in federal environmental policy that eliminates protections for wildlife and public lands, organized efforts are required to ensure our wildlife is protected.

This petition is to collect electronic signatures for a letter to the director of the Iowa Department of Natural Resources asking for a meeting to discuss the ban on working with white-tailed deer, the decision-making process within the agency, an appeals or public response process, and to clarify the values and position of the Department in regards to wildlife conservation.

HERE IS THE LETTER:

On December 19, the Iowa Department of Natural Resources sent a letter to the certified wildlife rehabilitators in the state regarding changes in authorization to rehabilitate and also announcing a moratorium on the rehabilitation of all white-tailed deer per your directive.

This letter was met with confusion and dismay by many in the rehabilitation community. The rationale given is to prevent the spread of Chronic Wasting Disease. No one is more concerned about the well-being of the deer population than Iowa’s wildlife rehabilitators. We have been an active ally for the DNR in regards to preserving native species, not only by rescuing and providing rehabilitative care prior to release, but also by interacting with and educating the public. All of which is done without expense to the state.

Usually when we work with deer, it is in regards to fawns: a mother deer is hit by a car, a well-meaning but ill-informed member of the public “rescues” an unattended fawn, etc. We are not primarily responding to concerns about sick deer. While Chronic Wasting Disease shows few symptoms early on, there is little reason to believe that every deer we are called about presents the same risk.

There has been a distinct shift in real and proposed policy at the federal level toward wildlife – allowing the hunting of hibernating bears, eroding the endangered species act – as well as actions taken in other states against wildlife rehabilitation facilities without due process that has resulted in the destruction of healthy juvenile animals. These events have caused some rehabilitators to reconsider engaging in the work altogether – a great loss to states who need private individuals and agencies to provide the service, and to the natural environment we all depend on.

Given the above, we request a meeting between yourself, and other staff of your agency you feel should be involved, and a delegation of wildlife rehabilitators of Iowa to discuss the Chronic Wasting Disease directive, the process of decision making, and the vision of wildlife preservation in Iowa.

Please reply to Team Mojo WildRescue. Thank you for your thoughtful consideration of this matter,

On behalf of Team Mojo WildRescue and the undersigned.