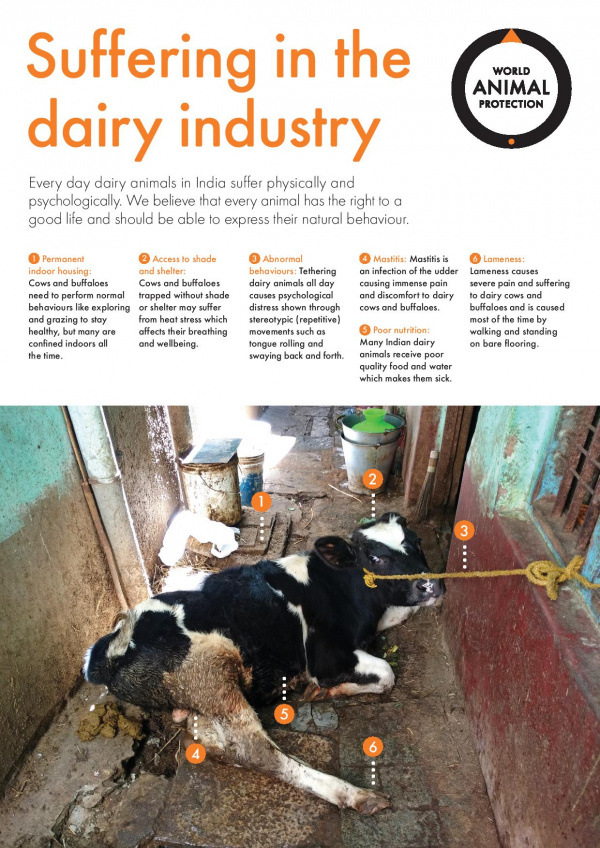 Ask for better life for dairy animals in India

Have you ever tried to find out the real story behind the milk that you consume?

World Animal Protection did research across local dairies within the city limits of six major metropolitan areas in India; it has exposed the inhumane living conditions and shocking treatment of dairy cows and buffaloes.

It is believed about 50 million animals could be currently suffering.

This treatment extends to their general living conditions that cause immense pain and stress. For example, Many dairy animals are:

This is why we, the undersigned, are taking action.

Dairies in India are governed by the Registration of Cattle Premises Rules under the Prevention of Cruelty to Animals Act, but our research has found many local diaries are operating outside the law.

This means groups are ignoring animal laws and policies set to protect animals and the environment.

It's why we urgently ask the Department of Animal Husbandry, Ministry of Agriculture and Farmers Welfare, Government of India, to enforce its own rules and give a better life to all the cows and buffaloes.

Sign this petition to add support - and ask that you, our government, address this critical issue.