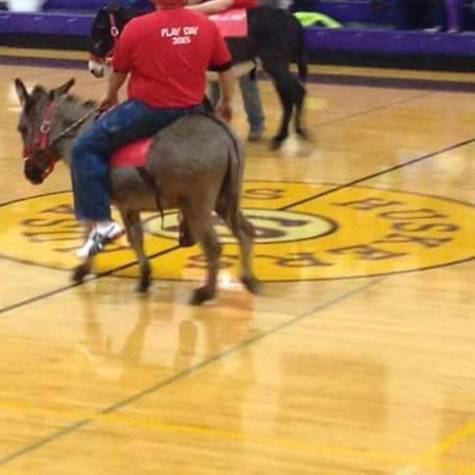 Donkey basketball, once popular in the 70's is a cruel and outdated practice. Donkeys are sensitive pets with a naturally gentle and trusting personality. During Donkey Basketball events donkeys often suffer mistreatment and abuse from unskilled handlers. The animals are many times dragged, hit by balls, kicked, slapped and sometimes forced to carry riders who are too heavy for the donkey. This abusive handling causes extreme stress and fear. Excessive weight causes damage to tendons, ligaments and skeletal structure. Sometimes the donkeys are withheld food and water so they do not "mess" on the court. These donkeys have to travel all over the country in cramped trailers forced to do game after game to make money.

The Humane Society of the United States, Prevention of Cruelty to Animals, National Miniature Donkey Association and others are strongly against the sport. Many people feel these events send young people the message that it is acceptable to abuse and mistreat animals for entertainment.

We ask that you please cancel Donkey Basketball on March 12th and consider alternative fundraising events.