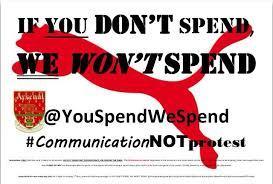 Arsenal Football Club - If You Don't Spend, We Won't

The most expensive ticket in English football remains at Arsenal, where a ‘category A’ adult match-day ticket can cost up to £126. To add insult to injury, Arsenal have recently announced that there will be a 3% price increase to tickets next season.

This news was fittingly disclosed shortly after signing a whopping £150 million kit sponsorship deal with PUMA which incidentally increases Arsenal's annual revenue by £22 million. To put that into context, this deal surpasses those of global giants Real Madrid, Barcelona and Manchester Utd!

As fans we believe a rise in ticket prices while the club is in apparent healthy financial shape, must be met with a subsequent concerted effort from the club to compete with the biggest clubs in the transfer market and on the pitch.

If this is not done, it demonstrates that Arsenal and its representatives have cast the clubs values aside and wish to proceed solely as a business.

We do not intend to part with our money to support a business and merely line the pockets of those who run it.

If you spend, We spend. Its simple.