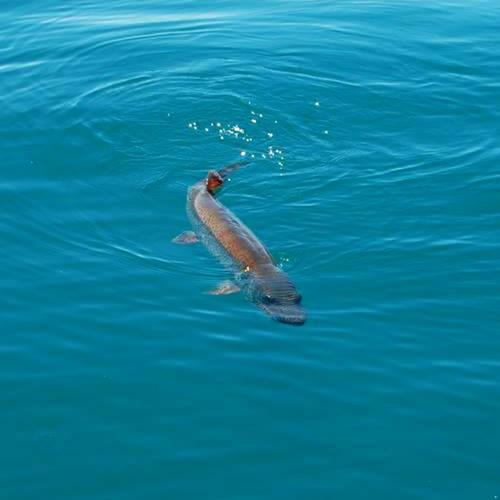 Let's discuss the possibility of bringing the Muskellunge (Muskie) back to Arizona!

627 people have signed this petition. Add your name now!

Re-introducing the Muskie to Arizona waters...

The Arizona Game and Fish is interested in your thoughts!

Which lake/s would you like to see stocked with Muskie?

We are promoting and collecting signatures and comments from those who are interested in the possibility of re-introducing the Muskellunge to Arizona.

The idea for this petition is not to print it out and wave it in front of a higher power. It was set up to serve as a positive platform to support and discuss the possibilities of re-introducing the Muskie to Arizona.

In 1973, thirty thousand six hundred Muskellunge (Muskie) sac-fry were planted in Mormon Lake southeast of Flagstaff, Arizona by the Arizona Game and Fish Department. Shad were also stocked in the lake. The lake went dry and the Muskie anglers and the Muskies did not stand a chance. There are several lakes in Arizona that can potentially support a healthy population of Muskies. With suitable habitat and water temperatures... let's try and give them another chance.

Muskie have been found in over 35 states and exist in over 1,000 different bodies of water throughout the United States and Canada. Tiger Muskie have been stocked in over 25 states including Colorado, Idaho, Montana, New Mexico, Oregon, Utah, Washington, and Wyoming. Muskie do well in lakes and rivers.

Illinois once had a native population of Muskies. Due to pollution, overharvest, and destruction of natural habitat, the Muskie fishery had disappeared by the late 1960’s. Through private donations, the Chicagoland Muskie Hunters division of Muskies Inc. was able to purchase Muskie fingerlings and public lakes in Illinois were stocked in the 1970’s. Several different strains of Muskie fingerlings were purchased or trades were made. Numerous states including Indiana, Iowa, Kentucky, Michigan, Minnesota, New York, Ohio, Pennsylvania, Tennessee, and Wisconsin helped provide Illinois with different strains of Muskie. Fish from all over eventually lead to a new strain of Muskie, which is now referred to as the “Illinois Strain.”

Muskie diet samples were collected between May 2007 and May 2012 in Mingo Lake, Otter Lake, Pierce Lake, Ridge Lake, Sam Dale Lake, Lake Shelbyville, and Lake of the Woods located in Illinois. There was no consistent pattern of predation on Largemouth Bass or other game fish species. Shad were the primary forage of Muskies when present. Largemouth Bass populations were analyzed after Muskie introductions in Johnson Lake, Wheel Lake, and Shovel Lake - also located in Illinois. Data and catch records from anglers show that Largemouth Bass populations and overall average size increased after Muskies were introduced.

The Muskie is a very important game fish in Wisconsin and throughout North America. 1,092 Muskie in 34 bodies of water located in Wisconsin were studied from July 1991 to October 1994. Only 34.3% of the total Muskie had food in their stomach. 74% of the Muskie had one single prey item in their stomach. Fish made up 98% of the Muskies diet. Walleye ranked low in the Muskies diet while Yellow Perch were the primary forage.

The Arizona Cooperative Fish and Wildlife Research Unit believes Muskies would be a better suited alternative to Northern Pike in Arizona waters. The two can co-exist together.

Colorado Parks and Wildlife have talked about stocking Tiger Muskies in the Colorado River to help manage the Northern Pike population to protect native species of fish.

New Mexico has stocked Tiger Muskies and it improved an existing Trout fishery according to resident anglers.

Flathead Catfish are known as apex predators in many bodies of water throughout the U.S. Indeed, Arizona supports several healthy Flathead Catfish populations in its lakes. In fact, some of those same lakes also support healthy populations of game fish such as Largemouth Bass and Smallmouth Bass. Many small (less than 100 acres) and large lakes around the lower 48 contain Muskies as well as excellent populations of Bluegill, Crappie, Bass, and Walleye. In a popular aquarium, Muskies have gone up to six months without eating. Muskie are more selective in their feeding habits, generally eat less than Flathead Catfish, and usually exist in much lower numbers. Furthermore, predatory fishes such as Muskies have the potential to increase the size and quality of certain fish populations of species such as Largemouth Bass.

Experiencing the opportunity Muskies offer will create memories and a passion that will last a lifetime. Muskie can be caught on specialized Muskie fishing tackle, heavy Bass gear, and fly fishing equipment both casting or trolling - day and night. They will hit a wide variety of fishing lures and can also be caught on live bait. Low-light conditions, moon phases, and weather changes will sometimes increase Muskie activity. The Muskie is renowned as a sport fish, because they are challenging to catch, will test angling ability, and can reach sizes over 50 inches long. Re-introducing the Muskie to Arizona would present unique opportunities for the public, anglers, and biologists.

Let's discuss the possibility of bringing the Muskellunge back to Arizona's amazing fishery!

Thank you. Your time is appreciated.


We are not asking for donations. The donation page that comes up is for ipetitions. We are not receiving any donations for stocking efforts. You do not have to pay or donate any money to sign and comment on this web page.