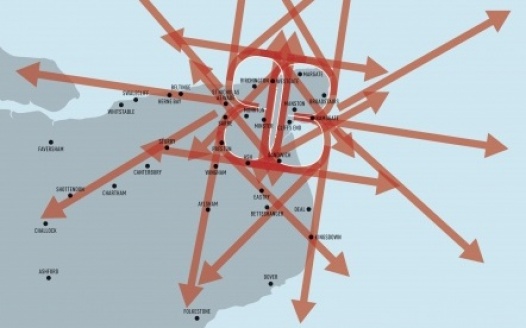 ARE YOU LIVING UNDER THE NEW MANSTON AIRPORT FLIGHTPATHS?

MANSTON AIRPORT IN EAST KENT is being developed into an international cargo hub with all-new flight paths.

This petition is asking the Civil Aviation Authority to ensure complete transparency on all new flightpath consultations so that all those affected can understand the true environmental impact of Manston airport's development.

This map illustrates some of the many proposed flightpaths airport developers are requesting over populated areas of East Kent. The routes shown here are shown in the developers most recent consultation documents. So far these consultations have been discussed and developed behind closed doors and questions have been raised asking if the relevant communities and their representatives have been properly informed and consulted.

Current flightpath proposals show over 30 East Kent towns and villages which could be impacted by heavily polluting cargo aircraft.

Govt planning experts say the airport it not needed. It is estimated that Manston will use up 1.9% of the UK’s target CO2 emissions for 2050.

These consultations are already at stage 2. The next consultations start in September. If you weren’t consulted or represented, and feel that you should be, please sign this petition now.

Number of flights: Manston has permission for 64,000 air traffic movements a year, that’s 176 flights a day or approx 10 an hour. There is currently no limit on the number of late arrivals coming into the airport at night.

Flight paths: A normal flight path corridor can be up to 14km wide. The corridors (red lines) on this map show a width of approx 1km. Developers admit they have no control over the exact path each aircraft chooses.

Pollution: Cargo planes are the noisiest, least efficient and most polluting types of aircraft. Manston will predominantly be flying freight-only planes converted from older passenger planes – such as the recently retired 747s.

Climate Change: lt has been estimated that running Manston as a cargo hub will use up 1.9% of the UK’s target CO2 emissions for 2050. Experts, including the Government's own planning inspectors, say there is sufficient capacity at other airports and that Manston isn't needed.

Noise: Experts say that anything above 85 decibels can damage your hearing. Noise levels under previous flight Manston paths have been measured as loud as 100 decibels.

If you feel any of the above could affect you and that you would like more transparency on the routes and environmental impact of Manston airport's new flightpaths please sign, and then share, this petition now.

A independent judicial review has been set up to help fight this development. If you want to find out more and support this action please click here

CARMA is the Campaign Against Reopening Manston Airport. For more information on the Manston airport visit www.thecarma.co.uk